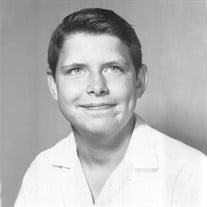 Amory—Herbert Thomas Tisdale Jr., 70, passed away on Saturday, August 31, 2019 at North Mississippi Medical Center—Gilmore in Amory. Born in Memphis, TN on January 31, 1949, he was the son of Margueritte and Herbert Thomas Tisdale Sr. Thom attended Messick High School in Memphis, and graduated from Trezvant High School. His first job was with HT Tisdale’s Used Cars with his father, before working for Cleowrap in Memphis. Thom was a security officer for 10 years with Guardsmark in Memphis. He also worked as a security guard for Baptist/Germantown Hospital. He was a member of Freedom Baptist Church in Smithville. Herbert was also a member of The International Supreme Council of the Order of De Molay. Thom was a caring, devoted husband. He enjoyed reading the bible every day with his loving wife. In his free time, he enjoyed Marvel comics and fishing when he was able. Thom will be dearly missed. Thom is survived by his wife, Linda Minga Tisdale, of Amory; niece, Lisa Taylor, Bartlett; and great-niece, Heather Romberger, Bartlett and a nephew, Gary Clark, Barlett. In addition to his parents, he was preceded in death by his half-sisters, Barbara J. Clark, Carolyn J. Taylor; and nephews, Rex Clark and Louis Scott Taylor. A Celebration of Life service will be held at 2PM on Saturday, September 7, 2019 at Freedom Baptist Church in Smithville. A private burial will take place in Memphis, TN. Memories and condolences may be shared with the family at eepicklefuneralhome.com

Amory&#8212;Herbert Thomas Tisdale Jr., 70, passed away on Saturday, August 31, 2019 at North Mississippi Medical Center&#8212;Gilmore in Amory. Born in Memphis, TN on January 31, 1949, he was the son of Margueritte and Herbert Thomas Tisdale... View Obituary & Service Information

The family of Herbert T. Tisdale, Jr. created this Life Tributes page to make it easy to share your memories.