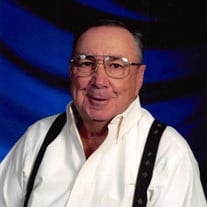 Wren – Herbert Alvin Jenkins, 78, passed away on Wednesday, December 19, 2018 at the North Mississippi Medical Center Hospice Center, Tupelo. Born on June 29, 1940 in Monroe County, MS, he was a son of Kenneth Alvin “KA” and Earline Jenkins. Herbert grew up in a large family and he attended Becker School. A man with a passion for fixing things, during his lifetime, he was always learning new things and he took several different courses in mechanics. He married the loved of his life, Barbara Shackelford, on October 28, 1967, and they were blessed with three children. His family and extended family was very close. Herbert was a great mechanic, who could fix any type of equipment, especially Agricultural Equipment. Herbert had a great work ethic. He worked at Ford Tractor shop and for Grisham Equipment which specialized in John Deere equipment repair. The last 39 years of his life, he was the proud Owner of Herbert’s Farm Shop. Herbert was a very active man who was blessed by God with a great career which provided for his family. A faithful member of Central Grove Baptist Church, Herbert was a loving and kind man who was also a strong leader. His faith guided his life decisions and he loved the Lord with all his heart. Herbert’s closest friends were his bubbas and his sis. Having shared so many years and experiences together, they helped each other through thick and thin. Herbert was a member of the Wren Fire Department for many years. He loved to listen to old country music and in his free time, he worked on pro modified cars. He liked to drag race and he had a car which he traveled with all over the South. He enjoyed working with his family and they often ate together on Sundays after church and fellowshipped for hours. Herbert loved his grandkids and great grand kids and was a wonderful husband and father. His smile and the emotions it brought will be etched in the memory of his loved ones forever. His family loved him dearly and they are so grateful for the fine example of a Christian man that he was in their lives. Herbert leaves behind a legacy treasured memories. He is survived by his wife of 51 years, Barbara Shackleford Jenkins; daughters, Debbie Smith (Scott) and Mary Harris (Rickey); son, David Jenkins (Marla), all of Wren; sister, Shirley Fuller, Siloam Springs, AR; brothers, Delbert Jenkins (Dana), Aberdeen; Larry 'Pete' Jenkins, Smithville; Jerry Jenkins, Wren; grandchildren, Whitney Christian (Tyler), Korie Jenkins (Anna), Emily Fears (Zachery); Hannah Jenkins; great-grandchildren, Naomi Jenkins, Ansley Christian, Elijah Jenkins, and Emelia Jenkins; a host of nieces and nephews. In addition to his parents, he was preceded in death by a brother, Nicky Dale Jenkins. His funeral service will be held at 11 AM, Saturday, December 22, 2018 at Central Grove Baptist Church, with Bro. Dennis Smithey officiating. Burial will follow in New Hope Cemetery, Aberdeen. Pallbearers will be Rodney Guyton, Josh Guyton, Steve Jenkins, Brian Jenkins, Brandon Jenkins, Richard Faulkner, and Jesse Worthey. Honorary Pallbearers will be Travis Thompson, Gene Faulkner, and Dennis Spragins. Visitation will be on Friday evening, December 21, 2018 from 5-8 pm at the Funeral Home in Amory, MS. Please feel free to share memories and condolences with his family at eepicklefuneralhome.com.

The family of Herbert Alvin Jenkins created this Life Tributes page to make it easy to share your memories.

Send flowers to the Jenkins family.