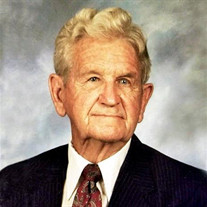 Amory — Henry Grady Wright, 94, passed away on Monday, March 19, 2018, at Oak Tree Nursing Center in Amory, MS. Born on June 3, 1923, in Vernon, AL, he was the son of the late Linnie Houston and Lillie Clementine Crosley Wright. Growing up, Henry attended school in Vernon. Being a patriotic American, he left High School early to join the United States Marine Corp. He served in the Marine Corps and fought in World War II. He was a member of First Baptist Church. He married the love of his life Mary Mildred “Millie” Schumpert and they were blessed with two children. He worked for 35 years for the telephone service South Central Bell. Henry was a true Entrepreneur who was a great salesman and bargainer. Henry ran his own business “The Trading Post” and he also rented properties throughout Monroe County. He was a driven business man and used his intelligence to succeed in all of his business dealings. A community involved individual, Henry also served as Alderman at Large for the City of Amory for 8 terms, 32 years. Henry was an avid reader of his Bible. He was passionate about giving to the Eldridge Children’s Home. He was always willing to help people out and he would usually tell folks “anything I can do for you, let me know”. In addition to serving in the military, Henry was a Thirty Third Degree Mason who belonged to the Amory Masonic Lodge J.A. Mayfield #165 and he was also a Shriner. He loved being outside, fishing, bird hunting and fixing bicycles. Mostly, he enjoyed spending time with his grandchildren and great-grandchildren. In his later years, he could often be found hanging out with his side kick, Ace Chadwick Jones. Henry had a big heart yet he was strong and humble at the same time. He was a giving man who never met a stranger. A true historical Amory character, Henry Grady will forever be remembered by all that knew and loved him. Survivors include his grandchildren, Chad Jones, Amory, Rachael Wright Jones, Winfield, and Matthew Wright, Guin, AL; great-grandchildren, Ace Chadwick Jones, Amory; Ada Rose and Ellie Jones, Winfield. In addition to his parents, Henry was preceded in death by his wife, Millie Schumpert Wright; son, Randy Wright; daughter, Teresa Wright Matthews; sisters, Helen Rutledge and Sarah Key Morgan. A Celebration of Life Service will be held for Henry Grady at 11 AM, Thursday, March 22, 2018, at E.E. Pickle Funeral Home with Dr. Allen Simpson, Bro. David Crowe, and Bro. Chris Mitchell officiating. Burial will follow at Masonic Cemetery. Pallbearers will include Larry Duncan, Walter Word, Dr. Brendan Miles, Bobby Harper, Craig Jones, McRae Turnage, Carter Naugher, and Wayne Thorn. Honorary pallbearer will be Grice Webb. Visitation will be from 5PM - 7 PM on Wednesday night at the Funeral Home in Amory. Memorials may be made to the Alabama Free Will Baptist Children’s Home, PO Box 8, Eldridge, AL, 35554, or the St. Jude Children’s Research Hospital, 501 St. Jude Place, Memphis, TN 38105, or Le Bonheur Children’s Hospital, 848 Adams Ave, Memphis, TN 38130. Memories and condolences may be shared with the family at eepicklefuneralhome.com

The family of Henry Grady Wright created this Life Tributes page to make it easy to share your memories.