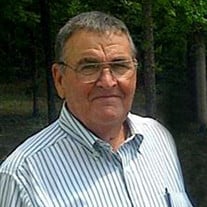 Tupelo— Henry Earl Doss, 82, stepped into Glory on Wednesday, October 2, 2019. Born in Enid, Mississippi, Henry was a son of the late Jessie Richard Doss and Mable Elvira O’Barr Doss Huffman. Henry was a lifelong resident of the Golden Triangle Area. He grew up in Chickasaw County, Mississippi and enlisted into the military at a young age. He served in Honolulu, Hawaii with the Navy for four years, and served for two years in reserves before being released with an honorable discharge. He then returned to the Golden Triangle to raise his family. Henry worked as a welder at Ellis Steel and Babcock and Wilcox until he retired after 33 years of service. He thoroughly enjoyed his retirement, fishing at the Tennessee-Tombigbee waterway every chance he got. Henry was known as a Good Samaritan as he had a servant’s heart for his family and neighbors. His faith in Jesus Christ shined through his actions and the way he treated others. He was a faithful member of Carnation Baptist Church in Okolona. Henry had a kind heart and was always willing to help others in need. He believed in hard work and the importance of family. He never spoke a negative word of anyone. In his free time, Henry loved fishing and hunting as well as working in his garden. He also enjoyed pulling a good prank or two. Henry was a wonderful man who will be remembered for his kindness and graciousness. The memories he shared with his loved ones will be cherished forever. Henry is survived by his loving wife, Linda Carolyn Doss (Tupelo); daughters, Sherry Westmoreland (Tim), Sulligent, AL, Janice Renee Doss, Colorado Springs, CO, Elesha Robertson, Amory, Kimberly Camp, Amory; sons, James Richard “Ricky” Doss (Tina), West Point, David Camp, West Point, Anthony Camp (Laura), Amory; brother, Curt Doss (Sue); 18 grandchildren; 11 great-grandchildren; numerous nieces and nephews; special friends, Bobby Harmon, Bob and Joe Huffman; and a host of treasured friends and extended family whose lives have been enriched by knowing him…We will see you in Heaven, Henry! In addition to his parents, Henry was preceded in death by his sisters, Sue Smith, Margaret Presley, infant sister, Annie Ruth Doss; brothers, Charlie Doss, J.D. Doss, Frank Doss, Johnny Doss, and great-grandson, Christopher Lee Allen Taylor. Funeral services for Mr. Doss will be at 2:30PM on Sunday, October 6, 2019 at E.E. Pickle Funeral Home in Amory, with Bro. Bart Latner officiating. Burial will follow at New Hope Cemetery in Hatley. Pallbearers will include Anthony Camp, David Camp, Jerry Fowlkes, Tyler Sloan, Kevin Doss, Caleb Robertson, Dustin Szerkins, and Ricky Doss. Honorary pallbearers will be Lee Kennedy, Cameron Szerkins, and Thomas Doss. Visitation will be Saturday night from 5-8PM at the funeral home. Memories and condolences may be shared with the family at eepicklefuneralhome.com

The family of Henry E. Doss created this Life Tributes page to make it easy to share your memories.

Send flowers to the Doss family.