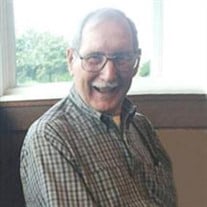 Aberdeen – Henry Buford Sargent, 91, began his new life in heaven on Friday, April 16, 2021. He was born in Monroe County, MS on October 13, 1929, to the late Abe Ruble Sargent and Edith Nash Sargent. Buford grew up in Monroe County attending Wren School until he enlisted to serve in the United States Army at a young age. He served during the Korean War and was a proud patriot. Buford was a man of many talents who was not afraid of hard work. He initially worked for Dryden Manufacturing and Body Works until he owned and operated the Amory Meat processing plant. Later in life, he worked as a truck driver, delivering across the United States. Throughout his entire life, he was a genuine cowboy and a farmer, working the land and raising animals. He was blessed by God during his lifetime with a loving family which included a wife, two sons, grandchildren, and great grandchildren. He was a member of Tranquil Methodist Church in Wren. Daily he read his Bible and did his very best to live by his Christian beliefs. His faith was evidenced in his gentle, soft spoken manner through which he would always tell you the truth. He was a man of his word and one could always count on something being done if he spoke it. He always did what was right to all causes and people as he knew the way God would want him to live. Others would call him righteous yet he would not ever accept any praise for a trait he knew only was perfected by God. He wasn’t afraid to take chances in life but would always be cautious considering others first. His family would say he was their last Cowboy, honest in his deeds, working hard for his family and always putting them first. He loved his family and grandkids and they all respected him, appreciative of the great role model he was for them. And in his free time, he liked to farm his land, play a good game of Rook, and bird hunt. He liked to buy, sell, and trade farm equipment and tractors. And when it came down to serious business, it didn’t matter what was going on at 12:00 noon, he didn’t like to miss a mid-day meal. He would stop everything for dinner, no matter where he was at the time, in a truck, on a tractor, or wherever. Later in life, after his wife Gloria died, Paula Clark became one of his close friends. They often went out together for supper and they liked to watch tv together. Throughout the years, many great memories were made with Buford. His family and friends are grateful for the wonderful memories throughout the years. The legacy of this great man will live on in the hearts of his loved ones for generations. Buford is survived by his sons, Randy Sargent (Kim), Harvest, AL, Todd Sargent (Jeannetta), Elk City, Oklahoma; grandchildren, Zach Sargent (Lauren), Kasey Sargent Beyer (Les); great-grandchildren, Taylor McKenna, Trista Hughes, and Will Sargent; sister, Barbara Jean Mitchell; special friend Paula Clark. In addition to his parents, he was preceded in death by his wife, Gloria Sargent, Sister, Ruth Basham, and brother, Tommy Sargent. A Celebration of Life Service will be held at 1 PM, Wednesday, April 21, 2021, with Rev. Allen Basham officiating at E. E. Pickle Funeral Home in Amory, MS. Burial will follow in Tranquil Cemetery, Wren, MS. Pallbearers will be Thomas Sargent, Todd Sargent, Zach Sargent, Les Beyer, Russ Lakin, Shea Lakin, and Max Lakin. Visitation for family and friends will be on Wednesday, April 21, 2021 from11:00 am until the service hour at the funeral home in Amory. Memories and condolences can be shared with his family at EEPickleFuneralHome.com.

The family of Henry Buford Sargent created this Life Tributes page to make it easy to share your memories.

Send flowers to the Sargent family.