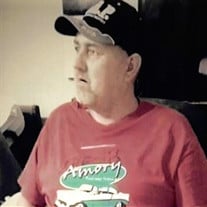 Hank L. Williams Amory — Hank Leonard Williams, 51, passed away on June 1, 2019 at NMMC - Gilmore in Amory. Born in Aberdeen on Oct., 27, 1967, he was a son of Samuel Williams and the late Betty Sue Pace. Hank finished the 10th grade in Hatley. As a young man, he loved riding his bicycle and detailing cars for people. Throughout life, the thing he enjoyed most was spending time with his family and friends. He was kind to everyone he met. He loved telling jokes and would laugh at the same joke even if he had already told it 5 times. Hank was headstrong and everyone that met him liked him. He was Baptist and a member of Antioch Baptist Church in Becker. He loved to play the guitar and could play a song after listening to it a couple times. He enjoyed riding his motorcycle and fishing. Some of his greatest pleasures were smoking, drinking coffee, eating authentic southern fried chicken, and his sister’s chicken and dressing. He liked watching Dukes of Hazard. He liked listening to country music by Johnny Cash and Hank Williams Jr. Besides his family, he was especially close to James West. If you were to ask him, he would tell you that his greatest accomplishment in life was being saved by Jesus Christ. The memories and laughs he gave his family and friends will live on forever in their hearts. He will be missed greatly. Hank is survived by his father, Samuel Williams, Becker; sister, Helen Chavis (James), Smithville; brothers, Howard Williams (Clinnie), Smithville, Harold Williams, Amory, Michael Harrelson (Kathy), West Point, Richard Harrelson (Angela), Amory; nieces and nephews, Kristerpher Harrelson, Arkansas, Kasey Kyzer, Arkansas, Mia Chavis, Smithville, Braxton Chavis, Smithville, Stephen Harrelson, Tupelo, Jennifer Tutor, Tupelo, Natalie Tutor, Tupelo, and Amber Plunkett, Missouri; several great nieces and nephews. He was preceded in death by his mother, Betty Sue Pace; sister, Sheila Tutor; second-mother, Betty Irene Williams; brother, Hansel Williams; Paula Clark Williams. A funeral service will be held Wednesday, June 5, 2019 at 11AM, at E.E. Pickle Funeral Home Chapel in Amory with Bro. Jesse Betts officiating. Burial will follow the service in Harmony Cemetery. Pallbearers will include Harold Williams, Howard Williams, Stephen Harrelson, Kristerpher Harreslon, Curtis Pace, and Richard Harrelson. Visitation will be Tuesday, June 4, from 5-8 PM at the funeral home. Memories and condolences may be shared with the family at eepicklefuneralhome.com

The family of Mr. Hank Williams created this Life Tributes page to make it easy to share your memories.

Send flowers to the Williams family.