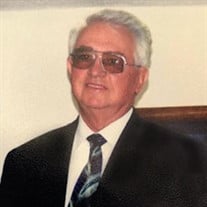 Amory — Bro. H. V. Brown, 86, left his earthly home to be with his heavenly Father on Tuesday, April 23, 2019. Born in the Eureka Community of Lee County, MS, on July 29, 1932, he was a son of the late James Monrow and Effie Brown. Growing up, Bro. H. V. attended Bigbee School and Amory Schools. He joined the US Army at age 15. His beloved sister got him out of the Army as he was too young to be in the service. He was later drafted at age 21 and returned to the same barracks he initially started when he was younger. He was discharged in 1955 as a Sergeant from Fort Jackson in South Carolina. Bro. H.V. eventually graduated from GI School in September of 1958 through the Shannon High School. A man who had a personal relationship with God, he was led by the Holy Spirit to pursue a career of doing “The Lord’s will.” He attended Temple Baptist Bible College and obtained his Bachelor of Theology in May 1983, and later received his Graduate of Theology. He was passionate about winning souls and helping people find Christ as their Lord and Savior. Bro. H.V. baptized and married many people in Monroe County throughout his career. God led him to start Unity Baptist Church and through his career. He also started a Bible Conference where he and many other Pastors were able to share God’s Word and messages. He enjoyed visiting and preaching at many churches. When he saw someone accept Christ, he was overjoyed. Bro. H.V. loved his family dearly and always started each day with prayer and studying God’s word. He was first married to Mary Nell Taylor for 27 years and they were blessed with four children. After she passed, he married Laritta “Rita” Leverrett Clark. God blessed them with a large extended family. In his free time, he loved working in his woodshop, gardening, and doing yard work. He enjoyed listening to tradition hymns as well as Gospel music. Bro. H.V. set a fine Christian example for his family and the generations that will follow. The main impact he left in his lifetime was to point others to Christ. He stood behind the rugged Cross and exhalted the Savior to all he met. The memories he leaves behind will be cherished forever by his family and loved ones. Bro. H.V. is survived by his wife and best friend, Rita Brown; sons, Timothy Stephen “Steve” Brown, Phillip Anthony Brown, and Daniel Taylor Brown (Kim); daughter, Karen Brown Carroll (Bro. Garry); step-son, Bro Johnny Rayford Clark (Teresa); grandchildren, Brandy Harrison (Rob); Taylor Brown; Nicole Fooshee (David); Jeremy Carroll (Whitney); Hope Markham (James); Tessie Stone (Tyler); Terry Brown (Chelsea); McKayla Jones (Alex); Allie Rutledge (JD); Madison Brown; Jonathan Clark; Lora Stangle (Tim); Susan Clark; Ben Clark (Jessica); Gabriel Clark (Leslie); Jacob Clark; Jessica Clark; 25 great-grandchildren; several nieces and nephews; his Army buddy, Gordon Sherman; close friend through the years, Preacher Doug Jones; and too many other friends to list. In addition to his parents, Bro. H.V. was preceded in death by his first wife, Mary Nell Taylor Brown; daughter, Renee’ Brown; step son, Charles Crandall Clark; brothers, Libran Brown (Masie), Douglas Brown (O’ Clay), Junior Brown (Marie), and Billy Doyle Brown; sisters, Earline Ridings (Frank), Louise McCullough (Willie); half-sisters, Beulah, Nannie, Pearl, Willie, and Daisy; half-brother, Henry Vardaman Brown. His Funeral Service will be held at 2 PM, Friday, April 26 at E.E. Pickle Funeral Home, Amory, with Bro. Jacob Rutledge, Bro. Garry Carroll, and Bro. Johnny Clark officiating. Burial with Military Honors will follow in Liberty Cemetery. Pallbearers will be Steve Brown, Phillip Brown, Daniel Brown, Jeremy Carroll, David Fooshee, Terry Brown, Jayden Fooshee, J.D. Rutledge. Visitation will be from 5-8PM, Thursday, night at the funeral home. Memories and condolences may be shared with his family at EEPickleFuneralHome.com.

The family of Bro. H.V. Brown created this Life Tributes page to make it easy to share your memories.