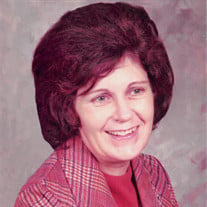 Nettleton— Gertrude Galloway Swan, 99, passed away peacefully on Tuesday, June 25, 2019, at River Place Nursing Center in Amory. Born in Greenwood Springs on May 25, 1920, she was a daughter of the late James Asa Galloway and Johnie Mae Finney Galloway Haynes Gertrude’s life was filled with ups and downs, laughs and cries, good days and bad days like most of us, but the difference lies in the sands of time. You see, she was a part of the Greatest Generation. The Greatest Generation were the ones who suffered through the Great Depression, fought in World War II, picked cotton by hand, and sharecropped to eat. They are credited with originally making America great and hard work was the key to survival. Members of the Greatest Generation are quickly dying and so are their stories. Gertrude’s story may not be unique by her generation’s standards, but her story is one that deserves to be told. When Gertrude was 5 years old, her little 2-year-old brother, J.D. Galloway (July 25, 1923-Feb. 2, 1926) tragically died after accidentally swallowing rat poison that was left by previous tenants of a little shack where her family moved. Her father, James Asa Galloway (April 12, 1890-March 17, 1927) was devastated by J.D.’s passing and blamed himself for her brother’s death. One year later, her father was killed when a gravel pit collapsed on top of him as he worked to load gravel. Gertrude was six years old at the time of her father’s death and from that day forward, she worked to survive. Gertrude told her family stories of plowing their old mule, Joe, at the age of 8 while saying, “Woe, Hoe, Gee, Joe” as Joe plugged along row by row to turn the ground in preparation for planting. It was just Gertrude, her sister, Nettie Galloway (April 30, 1918-Feb. 12, 1938), and mother, Johnnie Mae Galloway (Nov. 29, 1889- Dec. 4, 1969). There were no birthday presents or parties, no Thanksgiving meals, and no Christmas gifts as a child. Every day was the same and it entailed work. At the age of 16, her luck changed when she met the love of her life, Harold Swan (Dec. 27, 1915-May 27, 1994). After hitching a ride with a bootlegger to Fulton in 1937, the two were married at the courthouse with no family in attendance. She wanted her sister, Nettie, to ride with them, but it was winter and there was not enough room in the cab of the bootlegger's truck for Nettie to go. Nettie died the following year from tuberculosis. Gertrude and Harold both sharecropped and chased cotton fields to pick in order to live through much of their life. One particular year, they borrowed everything needed to make a crop, planted, and harvested. After paying their bills after harvest, they had just enough profit to buy a piece of cloth to make a dress and Harold a pair of shoes. They were “dirt poor” but managed to have enough food to eat. Both worked the majority of their adult lives in the garment factories in Amory. In 1950, they bought a plot of land and a three-room shack in the Cason community outside of Nettleton and made it their home. They had two sons, Grady and Ken (whom they loved very much), and were married 57 years when Harold passed away from cancer. She loved her family. She believed in working hard and did not like anyone doing anything that she could do herself. The reason for her story is not for sympathy, but for understanding in what it means to survive in a world that throws you curves. To the ladies at River Place nursing home, she was known as Ms. Swan; to her sons, she was Mother; to everyone else, she was Maw Maw. Tuesday morning, she breathed her last breath, met Jesus, and reunited with her family. She was 99 years old. Gertrude is survived by her sons, Grady Swan (Faye), Saltillo, MS, Ken Swan (Peggy), Amory, MS; grandchildren, Kim Holcomb (Tim), Brent Swan (Amy), Michele Orr, Kirk Swan (Theresa), Sandra Dewberry (Ken); great-grandchildren, Lucas Culver, Evan Holcomb, Noah Holcomb, Cheree Holcomb, Drew Holcomb, Brayden Orr, Addie Swan, Alexis Swan, Bobby Swan, Erin Alarji, Lorie Leech; 4 great-great-grandchildren; numerous nieces and nephews; and special friends, Linda Sue Maxey and Ann Hester. In addition to her parents, she was preceded in death by her brother and sister. A funeral service will be held at E.E. Pickle Funeral Home in Amory at 4PM on Saturday, June 29, 2019, with Bro. Matt Long and Bro. Jim Manley officiating. Burial will be in Masonic Cemetery. Visitation will be from 3PM until the service hour on Saturday Please share your memories and condolences with her family at eepicklefuneralhome.com

Nettleton&#8212; Gertrude Galloway Swan, 99, passed away peacefully on Tuesday, June 25, 2019, at River Place Nursing Center in Amory. Born in Greenwood Springs on May 25, 1920, she was a daughter of the late James Asa Galloway and Johnie Mae... View Obituary & Service Information

The family of Gertrude Swan created this Life Tributes page to make it easy to share your memories.

Send flowers to the Swan family.