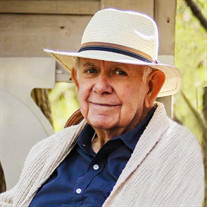 Farris Eugene (Gene) Wright of Amory, MS died peacefully at his home on March 4, 2019. HIs last days were spent surrounded by family and friends and his loving wife, Patsy Wright. He was born on October 4, 1934 to the late John Calvin Wright and Ida Little Wright of Aberdeen, MS. Gene grew up in Aberdeen where his father was a police officer with the City of Aberdeen Police Department. After his graduation from Aberdeen High School, he enlisted in the Navy and was stationed in San Diego, CA during the Korean Conflict. Before his deployment, he was granted leave to visit his family in Mississippi. He was almost killed in a car accident as he hitchhiked his way home. After a year long hospital stay and an even longer recovery, he beat all odds and regained his ability to use his legs, something the doctors had said would be impossible. He was discharged from the Navy as a Disabled Veteran and returned to Aberdeen, where he met and married Patsy Allen. The two were wed on June 23, 1955 and moved to Ellisville, MS, where Gene earned an associate degree in watchmaking and jewelry repair. He and Patsy opened Wright and Buxton Jewelers in May of 1968 on Main Street in Amory. After a few years, the store became Wright’s Jewelers and they continued to operate until 2005. Through the years, They opened branches of Wright’s in Fulton, Columbus, and Tupelo. Eugene was a highly sought after watch and jewelry repairman and was later joined by their son, Barry, as a fellow jewelry repairman. Gene and Patsy had many employees during their 37 years of business and each one became like family to them. They were always welcoming and kind to each employee, as well as each customer, and many people in the Amory community have fond memories of time spent at Wright’s Jewelers. Gene had a passion for building and driving fast cars and motorcycles. The years he spent working on race cars with his son, Barry, and their many friends, were some of his most treasured moments. He was an excellent role model to the “racing guys” and especially to his grandson, Chris, who shared his love for cars and racing. He eventually turned his dream of flying into a reality and trained to become a pilot. He loved to fly, just as he loved to ride. To know Gene was to love Gene, and he made many friends throughout his lifetime. He enjoyed his mornings and afternoons visiting with the “coffee shop” crowd that gathered at Wright’s and next door at People’s. He had an adventurous spirit and a passion for life that was infectious. He is survived by his wife, Patsy; their children, Charlotte Wuichet, Amory, Teresa Ware (Shelby), Tupelo, Barry Wright, Amory, and Alisha Galey (Louie), Brandon; grandchildren, Mason Herring, Sally Stallings (Zach), Christopher Herring (Brooke), Mary Hubbard (Zack), Corynne Pless (Weldon), Trey Ware, Betsy Ware, Katie Powell (Trey), Karry Wills (Josh), Sonny Galey, and Calvin Galey; brothers in law, Al Woodhouse, Morgan Kroll; sisters in law, Martha Allen, Claudia Allen; many great- grandchildren, nieces and nephews, and treasured friends. In addition to his parents, he is preceded in death by his siblings, J.C. Wright (Ina Rhea), Alba Murff (Newman), Dorothy Peeples (Winston), Arlene Lockhart (Odell), and Thomas “Brack” Wright (Catherine); brothers in law, Jack Allen, Johnny Ray Allen; sisters in law Peggy Woodhouse, Glenda Kroll. Services will be held at E. E. Pickle Funeral Home with visitation on March 9, 2019 from 5:00-8:00 and funeral service on March 10, 2019 at 2:00. Pallbearers are Jay Dickens, Dee Comer, David Westbrook, Tim Ritter, Junior Barnett, and Jesse Barnett. Honorary Pallbearers are members of the Wright’s “coffee shop” crowd.

Farris Eugene (Gene) Wright of Amory, MS died peacefully at his home on March 4, 2019. HIs last days were spent surrounded by family and friends and his loving wife, Patsy Wright. He was born on October 4, 1934 to the late John Calvin Wright... View Obituary & Service Information

The family of Gene Wright created this Life Tributes page to make it easy to share your memories.