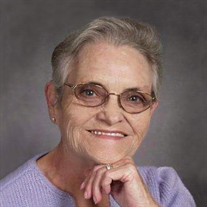 Willie Gaye Powell Amory— Willie Gaye Logan Powell, 77, passed away on Wednesday, October 3, 2018, at her residence. She was born in Hamilton, MS on August 15, 1941, to the late Stephen Andrew and Katie Lou Taggart Logan. Gaye attended Hamilton and Amory schools. She worked as a seamstress for many years at Glenn’s and Red Kap garment factories. She married the love of her life, Robert E. Powell, Sr. on July 1, 1961, and together they were blessed with three children. Her husband was in the Air Force so their family lived in places such as New Mexico and Japan. While living in Louisiana, Gaye worked in the Palais Royale and JC Penney department stores in Bossier City. Upon returning to Amory, Gaye went back to work in the furniture industries. Above all, God came first in her life, she loved her daily devotional times and everyone that met her could tell that she treasured her relationship with God. Gaye was a long time member of North Boulevard Christian Church and she loved both her family and church family dearly. Her grandchildren gave her so much joy in her life and spending time with all her family was so important to her. Some of her closest friends were Carolyn Logan, Sue Logan, Angie Logan and Bessie Carter and they would often have lunch outings where they would fellowship for hours. Some of the music she liked to listen to was old country music, with Marty Robbins and Conway Twitty being a couple of her favorite artists. Gaye was a very compassionate, giving, loving, and kind-hearted woman. She would have said that during her lifetime, her greatest accomplishments were her relationship with God, being a mother of three children, and wonderful grandma to many and a loving Aunt to many nieces and nephews. The memories she left behind for her family and friends to cherish forever. Gaye is survived by her daughters, Lorrie Robertson (Linn), Bossier City, LA, Debra Sayre (Edward), Aberdeen, MD; son, Rob Powell, Jr. (Donna), Booneville; grandchildren, Taylor Powell, Blaine Powell, Timothy Copeland, Brandon Copeland, Katie Emerson, Sarah Robertson, Tony Sayre, Eddie Sayre, Aieleia Sayre; great-grandchildren, Amelia Copeland, Pierce Copeland, Lane Emerson, Connor Sayre, Edward Sayre IV, Zachary Jones, and Blaze Jones; sister, Faye Harrington, Jackson; and several nieces and nephews. In addition to her parents, Gaye was preceded in death by her husband, Robert E. Powell, Sr.; grandchild, Samantha Sayre; brother, David Ray Logan; sister, Linda Logan Humbers. A Celebration of Life service will be held at 2PM Sunday, October 7, 2018, at E.E. Pickle Funeral Home. Bro. Tony Stahl and Bro. Greg Strickland will lead the service. Burial will follow at Masonic Cemetery, Amory. Pallbearers will include Chad Logan, Steve Logan, Dale Stafford, David Logan, Freddie Humbers, and Brian Logan. Her grandsons will serve as honorary pallbearers. Visitation will be from 5-8PM Saturday, Oct 6, 2018, at E. E. Pickle funeral home. Donations may be made in Gaye’s memory to North Boulevard Christian Church, 1201 Boulevard Drive N, Amory, MS 38821; St. Jude Children’s Research Hospital, 501 St. Jude Place, Memphis, TN 38105; and Le Bonheur Children’s Hospital, 848 Adams Ave, Memphis, TN 38103

The family of Gaye Logan Powell created this Life Tributes page to make it easy to share your memories.

Send flowers to the Powell family.