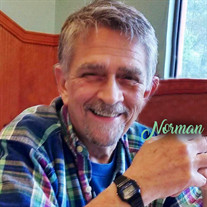 Amory - G. Norman James, 74, entered into Heaven, December 23, 2017, while a resident for a brief time at Sanctuary Hospice in Tupelo, MS, having been in a one-car accident June 6, and recently having had a stroke. He was the youngest of five children born to immigrant parents, Kata and Naum James of Amory, MS. Norman was a graduate of Amory High School, Class of 1961, where he was active in the band playing drums, glee club, plays, and was business manager of the school paper, The Peptomist. He enjoyed playing golf with his parents, card games with friends, and fished with his Father on the Tombigbee River and at a secluded lake called "Poison Pond." Two weeks after graduating from high school, he moved to Memphis, TN, where he attended Memphis State College, now University of Memphis, majoring in speech and theatre. In Memphis, he worked for General Foods and then Union Planters Bank, now Regions Bank, training in computer programming and was a member of a bowling league. On a lark, he worked as a bartender in New Orleans, one summer. In 1969, Norman moved to New York City and began working for W. T. Grant Corporation, followed by The Ford Foundation, and lastly Coopers & Lybrand, which is now PricewaterhouseCoopers. While at PWC, he was sent on assignment to Alaska, California, other states, and Paris, France. He also taught computer science at NYU in Manhattan. He had been living in North Babylon, New York, before returning to Amory in 1997, where he continued working for PricewaterhouseCoopers for a few years and as a consultant in desk-top publishing before retiring. After retiring, he worked at times for Atkinson Steak House in Smithville, MS and the Park Restaurant in Amory. Norman was a member of First United Methodist Church in Amory and the Chancel Choir. He had been a member and past President of Amory Rotary Club and was a member and danced/performed with Tupelo Ballroom Dance Club. He was involved in helping those who suffered with substance abuse and served on several civic committees, as well. He was a connoisseur of automobiles, especially those of the 40's, 50s', and 60's, a gourmet cook, and he loved entertaining family at holiday times, especially at Thanksgiving, when his guest list numbered well into the thirties. At Christmastime, he enjoyed hosting his church choir for their annual party. Once, he traveled extensively through Europe with his sister Mary, visiting an area of Bulgaria where their mother had lived. A staunch Democrat, but almost always unbiased on Facebook, Norman's posts were spiritual and uplifting to his readers, and many times amusing, especially photos of his dogs! . In addition to his parents, he was predeceased by his brother, Dr. Thomas N. James of Birmingham, AL, brother Philip N. James of New York City and Amory, a sister Helen George Pipher of Memphis and Amory, brothers-in-law Herbert George and Charles Pipher, uncle and aunt Criss and Vasilka James of Amory, an uncle Philip Dimitroff of New Albany, MS, who died before the family name was Anglicized, several cousins and spouses from Amory, maternal relatives in Indiana, special cousins Miss Shirley James and Sophie Toney Deghuee, a niece Georgia "Gigi" James, grandparents, uncles and aunts of Macedonia and Bulgaria he never knew, special friend Martha Faulkner McNeese of Amory, and his treasured dog Theo. He is survived by sister Mary James, Ph.D of the home, sister-in-law Gleaves Tynes James of Birmingham, AL, nephew/niece caregivers Terry and Loryn James of Birmingham, AL, Mark and Marine James of Waikehe Island, New Zealand, Peter James of Sterrett, AL and fiance Joy, one first-cousin Luba "Boobie" James Hill, attending cousins Jeanette James Keyser and Mary Keyser of Calhoun City, MS, David Hill of Amory, Paul James of Amory, and Dorothy "Dot" Toney Fears of Tupelo, a favorite cousin Emily Deghuee Schmidt of Atlanta, GA, special friend/caregiver Sammie Elliott of Amory, and special friends Norma and Pete Atkinson, Neita Brasfield, Bobbye Miller Brinson and Staff of Miller's On Main, Judy Dobbs, Rubye Del Harden, Penny Leech, Melinda Petty, Tony Poss, Zach Stallings, numerous cousins, great-nieces and nephews, many friends at his church who cared about him, his much loved dog Gabby, and longtime friends Martha Beeson of Ozark, AL, Florence Fletcher of Worchester, MA, Joseph Pirone of Babylon, NY, and Dr. Willis Warrender, of Key West, FL. A memorial service was held at First United Methodist Church in Amory, MS on January 5, 2018, at 2:00 p.m., with visitation prior to the service and afterward. The Reverend Wesley Pepper officiated and The Reverend Don McCain assisted. Cousin Paul S. James of Amory, great-niece Sara James of Birmingham, and the Chancel Choir provided special music. Honorary pallbearers were members of AHS Class of 1961, Staff of Sanctuary Hospice, Staff of Amory Animal Hospital, and special friends previously mentioned. Memorials may be directed to Amory Humane Society, First United Methodist Church of Amory, or a charity of choice. Memories and condolences can be shared with his family at EEPickleFuneralHome.com.

Amory - G. Norman James, 74, entered into Heaven, December 23, 2017, while a resident for a brief time at Sanctuary Hospice in Tupelo, MS, having been in a one-car accident June 6, and recently having had a stroke. He was the youngest of five... View Obituary & Service Information

The family of G. Norman James created this Life Tributes page to make it easy to share your memories.

Send flowers to the James family.