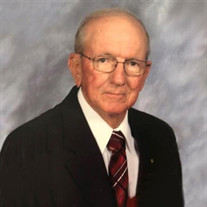 James Frank Finney Amory – James Frank Finney, 82, become totally healed and began his new life in Heaven on Tuesday, March 8, 2022. He was born on October 22, 1939, in Amory, MS, to the late Jim Frank Finney and Lillian Johnson Finney. Frank grew up in Monroe County and graduated from Amory High School in 1958. At age 19, he married the love of his life, Betty Joyce Bell, and together they were blessed with over 62 years of marriage and two children. Frank served this great Country in the National Guard. He also helped provide for his family by working as a lineman with the Monroe County Electric Power Association. Frank loved his job and the challenges it presented through the years. He served for over 41 years and retired in 2009. When he retired, he was the oldest man in the state of Mississippi still climbing poles for Power associations. A simple man who took great pleasure in the gifts God gave him, he cherished most his family, friends, and his fellow church members. He was a humble man who had a strong faith in the Lord, and he sharpened his faith by studying his Bible. An active member of First Baptist Church in Amory, Frank taught Sunday school and served in many areas of his church through the years. Frank was quiet and soft spoken, yet he hardly had to say a word around others as his kind personality just radiated from him. His smile was always a welcoming part of First Baptist, and he will be missed there by his brothers and sisters. In his free time, he loved to do anything outdoors. Frank was a member of the Frisco Cut Hunting Club, and he loved to hunt, fish, and grow anything in his garden. He also kept great company at the coffee clubs, where he and his buddies would solve all of the world’s problems. He also serving through the years at the Masonic Lodge in Amory. Of all the people whom he enjoyed being with, his wife, kids and grandchildren meant the world to him. Franks quiet and friendly presence will be forever remembered by his family and friends. They all will cherish the great memories made through the years. Left behind are his loving wife, Joyce Finney, Amory; daughter, Rosemary Finney Davis (Charlie Davis), Hattiesburg; son, Frank Carey Finney (Tam Markham Finney), Amory; grandchildren, Megan Finney, Luke Davis, Sydney Claire Davis, Hunter Davis, and Levi Davis; sister, Sara Finney Hall; a host of nieces and nephews, Steve Thompson, David Thompson, Karen Thompson Rogers, Cindy Hoots, Curt Bell, Casey Holloway, Randy Hall, and Sandy Hall; sister-in-law, Barbara Thompson (Wayne); brother-in-law, Ralph Bell (Peggy); special friends at the Frisco Cut Hunting Club and his coffee shop friends. In addition to his parents, he was preceded in death by his in-laws, Junior and Inez Bell. A Celebration of Life Service will be held on Friday, March 11, 2022, at 11:00 am, at First Baptist Church in Amory with Dr. Allen Simpson and Bro. Jimmy McFatter officiating. Burial will follow in Masonic Cemetery in Amory, with pallbearers being Ralph Bell, Curt Bell, A.D. Johnson, Steve Thompson, David Thompson, Randy Hall, Tim Nelson, Luke Davis, Danny Bickerstaff and Chase Gilreath. Honorary pallbearers will be Wayne Thompson, and the Former Co-workers of the Monroe County Electric Power Association. Visitation for family and friends will be held on Thursday evening at EE Pickle Funeral Home in Amory, from 5:00 pm until 7:00 pm. Donations, in lieu of flowers, may be made to Missions or the Building Fund at First Baptist Church in Amory. Memories and condolences may be shared with his family at EEPickleFuneralHome.com

The family of Frank Finney created this Life Tributes page to make it easy to share your memories.

Send flowers to the Finney family.