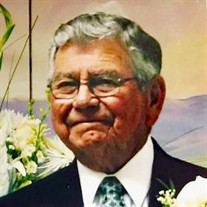 Francis Denver “Fiddle” Wright Smithville – Francis Denver “Fiddle” Wright, 91, passed away with his family surrounding him, on Tuesday, August 6, 2019, at the NMMC- Gilmore, Amory, MS. Born in Smithville, MS, on September 9, 1927, he was the son of Hiram Hurston Wright and Eula Mae Francis Wright. Fiddle was a Seminole who graduated with the Smithville Class of 1945. He proudly served in the US Army as a Medic and he was proud to be a WWII Veteran. After leaving the service, he went to work as a Fireman in McAllen Texas. He eventually worked a career in Maintenance at Kerr-McGee in Hamilton, MS. Some of his friends at work were Joanne and Mr. Whitehead. After retiring, he was a cattle farmer and a row crop farmer, during which he enjoyed working with Joe Morgan and Jimmy Cowley. His work ethic was amazing and he instilled in his family the importance of a job well done. He was all things Smithville and he was proud to be called the community “Paw Paw” or the “Town Grandpa”. He married the love of his life, Mary Elizabeth Cowley Wright, and together they were blessed with a son and many grandchildren and great-grandchildren. Fiddle was a faithful member of Smithville Baptist Church and his huge heart for God and people was evident to all who met him. He was a member of the Men’s Sunday School Class at church, a member of 4-H and FFA. He took time to teach life lessons to his family as well as younger people and he lived out his faith by supporting many in the Smithville community. In his free time, he attended many community sporting events, worked on projects in his shop, welded, worked in the garden, listen to Bluegrass and Gospel, and spent time with his precious family. His family said he was an excellent farmer and welder yet his greatest contribution was the excellent role model he was for them. Fiddle will missed dearly by all that knew and loved him. The memories he leaves behind will be cherished forever. Fiddle is survived by his son, Ricky Wright, Smithville; grandchildren, Marie Rogers (Joe), Dee Dee Jackson (John); great-grandchildren, Bo Rogers, Clara Beth Rogers, Jack Henry Rogers; several nieces and nephews and great nieces and nephews; special friends, Joe Morgan, Jimmy Cowley, F.B. Boozer, and caregiver, Ruth Benton. In addition to his parents, he was preceded in death by his loving wife Mary Elizabeth Cowley Wright; special first cousin, whom he considered a brother, Leon “Bunk” McKenzie. His funeral service will be on Saturday, August 10, 2019 at 11 am at Smithville Baptist Church, Smithville, MS with Bro. Wes White officiating. Burial will follow at Young Memorial Gardens, Smithville, MS. Pallbearers will be Joe Hal Morgan, John Holland, Teddy Faulkner, David Reese, Bo Rogers, John Jackson, and Joe Rogers. Honorary Pallbearers will be the Smithville Men’s Sunday School Class, and Former Co-Workers at Kerr-McGee. Visitation for Fiddle will be held from 5-8 pm, Friday, August 9, 2019 at Smithville Baptist Church, Smithville, MS. Memories and condolences may be shared with his family at EEPickleFuneralHome.com.

The family of Francis 'Fiddle' Denver Wright created this Life Tributes page to make it easy to share your memories.