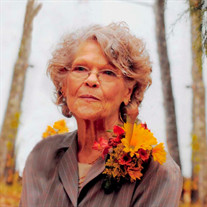 Smithville - Frances V. McCain, 72, passed away on Thursday, July 26, 2018, in Smithville. Born on April 29, 1946, in Lambert, MS, she was a daughter of the late Arthur D. and Lillie Bell Sanders Hester. Frances attended Crowder High School in Quitman County. She married Robert Edward McCain on July 6, 1962. She was employed at Gilmore Memorial Hospital for many years before leaving to work at Holland Fish and Steak House until the restaurant closed. A talented cook, she ran the kitchen in Holland’s. Frances had quite the green thumb as well, and could grow just about anything in her garden. She took pleasure in working in her yard and tending to her flowers. In her free time, she enjoyed solving puzzles and watching the Sci-Fi channel. Frances also loved antiques and “what-not’s.” Her true loves, however, were her grandchildren, especially her great-grandchildren. Frances was a sweet and kind hearted lady who will be missed dearly by all who knew her. She never met a stranger, and was known for her generous heart. Frances leaves behind a legacy of love and kindness that touched the lives of many She is survived by her sons, Bobby McCain (Lisa), Amory; Richard McCain (Rita), Smithville; and Ronnie McCain, Smithville; grandchildren, Lance (April); Drew (Meg); Micah; Macy; Trey (Amelia); Sarah (Scott); Jesse, Rachel, Laura, Margaret, and Mary McCain; great-grandchildren, Logan Tyler McCain and Elaina Jane Brown; brother, Paul Hester (Wanda), Marks, MS. In addition to her parents, she was preceded in death by her husband, Robert E. McCain; son, Randal Scott McCain; 14 brothers and sisters. Her Funeral Service will be held at 2 PM, Sunday, July 29 at the Smithville Chapel of E. E. Pickle Funeral Home. Burial will follow in Young Memorial Garden. Pallbearers will be Lance, Drew, Jesse, and Micah McCain; Scott Brown; John Holland. Honorary pallbearer will be Trey McCain. Visitation will be from 5-8 PM Saturday night at the funeral home in Smithville. In lieu of flowers, donations may be made to St. Jude Children’s Hospital, 501 St. Jude Place, Memphis, TN 38105

The family of Frances V. McCain created this Life Tributes page to make it easy to share your memories.

Send flowers to the McCain family.