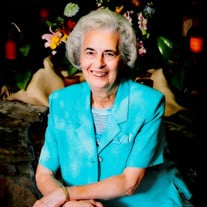 Amory - Frances Louise Adams Aldridge passed away on Saturday, April 18, 2020 at Oaktree Manor Assisted Living Center, Amory, MS. Born on April 13, 1930, in Quincy, Mississippi, she was a daughter of Andrew Washington and Leona McCulla Adams. She grew up in a large family in the Quincy Community. She was the first in her family to graduate from Greenwood Springs High School with the class of 1949. She met the love of her life, Doyle Aldridge and together they were blessed by God with four children. Frances was a strong willed, devoted wife and loving mother. In addition to being a successful homemaker for her large family, she also worked at Amory Garment from 1962 until 1995. She was Baptist and had a servant heart. Family meant everything to her, and she loved seeing them as often as possible. She loved cooking for her family and spending precious time with her grandchildren and great grandchildren. In her free time, she liked to be with some of her closest friends including Laverne Williams and Mildred Ritter. An independent woman, Frances liked to garden, read, and she even mowed the yard until she was 86. When she became a resident of Oaktree Assisted Living, she happily started a walking group and played dominos nightly. Her family and friends are grateful for the legacy she left behind for them to reflect on and follow. They look forward to the day when they will reunite with her and until then, they will cherish their wonderful memories. She is survived by her daughters, Shirley A. Sullivan (Danny), Amory, Kathy D. Franks (Gary), Mantachie, Wanda Tubb (Richard), Amory; son, Richard Doyle Aldridge (Melissa), Amory; 11 grandchildren; 15 great-grandchildren; brother, Odeen Adams, Amory; many nieces and nephews. In addition to her parents, she was preceded in death by her loving husband, Doyle Aldridge; grandson, Christopher Hall; 2 sisters and a brother. A graveside funeral service will be held on Monday, April 20, 2020, at Haughton Memorial Park, Amory, MS. Honorary Pallbearers will be Jason Sullivan, John Sullivan, Blake Tubb, Collin Aldridge, Mike Bradley, Casey Franks, and Tim Adams. A private family visitation will occur at the funeral home prior to the service. Donations in lieu of flowers may be made to St. Jude Children’s Research Hospital, 501 St. Jude Drive, Memphis, TN, 38105. Memories and condolences may be shared with the family at eepicklefuneralhome.com Please share your memories and condolences with her family at EEPickleFuneralHome.com

The family of Mrs. Frances Louise Adams Aldridge created this Life Tributes page to make it easy to share your memories.

Send flowers to the Aldridge family.