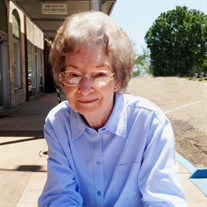 Greenwood Springs – Ila Faye Smith Blaylock, 89, gained her heavenly wings on Thursday, January 7, 2021, at North Mississippi Medical Center in Amory, MS. Born on April 23, 1931, in Weakly County, Tennessee, she was the daughter of the late Frank Roland Smith and Nora Lucyann Taylor Smith. Mrs. Blaylock attended elementary school at the Old Salem School near Martin, Tennessee. Then, when she entered 6th grade, she transferred to the Martin City School. Later, she worked at a cigar factory rolling cigars in Martin. After her mother passed away in May of 1950, she moved to Chicago. While working at Advertising Metal, she met the love of her life, Clovis Green Blaylock. They were married on April 5, 1952, in Gattman, MS. They lived in Chicago until moving to Greenwood Springs in 1959. She worked as a full-time mother and housewife. She also worked for 3 years from 1969 – 1972, as an inspector at the garment plant in Hatley. Faye was a quiet, Godly woman with a quick wit who was guided by her faith in the Lord and love for her family. She was a member of Splunge Freewill Baptist Church for over 40 years. She loved spending time talking with her family, getting her hair done at Brenda’s Beauty Shop, riding around looking at the sights and eating anything sweet, especially pear preserves. Survivors include her daughters, Patricia Ann Blaylock McKissick (Buddy), Smithville, and Barbara Jean Blaylock Smith (Paul), Adairsville, GA; sons, Jerry Wayne Blaylock (Michele), and Terry Dewayne Blaylock (Teresa) of Greenwood Springs; grandchildren, Shane Blaylock (Lynne), Valerie Smith de la Llama (Ryan), Sherri Smith, Hannah McKissick Mackenzie (Michael), Luke Blaylock (Kinsley), Hasten McKissick, Austin Blaylock, Tate Blaylock (Amber), and A. J. Blaylock; great-grandchildren, Kameron Blaylock, and Ezra and Isaac de la Llama; step-great grandchildren, Dylan, Caiden, Maddie and Maizie Mackenzie; and a host of nieces and nephews. In addition to her parents, she was preceded in death by her husband, Clovis Green Blaylock; a grandson, Brice Austin McKissick; brothers, Harold, Wendell, George, and Vincent Smith; half-brothers, Henry, Hale, Johnnie and Frank Smith; and half-sisters, Bessie, Ruby, Eva, and Blanche Smith. Also, her paternal grandparents, Jefferson Smith and Sarah Neely Smith; maternal grandparents, John Henry Taylor and Mary Ann Taylor Taylor. A Graveside Celebration of Life service will be held on Saturday, January 9, 2021 at 11:00 am at Blaylock Cemetery in Sulligent, Alabama with Bro. Heath Webb officiating. Pallbearers will be her grandsons, Shane, Luke and Tate Blaylock; Hasten McKissick; Austin and A. J. Blaylock. The family would like to extend a special thanks to Oak Tree Manor staff for loving and taking great care of Faye the last 3 years, and to the workers at Gilmore Memorial Hospital. Memories and condolences may be shared with her family at EEPickleFuneralHome.com

The family of Faye Blaylock created this Life Tributes page to make it easy to share your memories.

Send flowers to the Blaylock family.