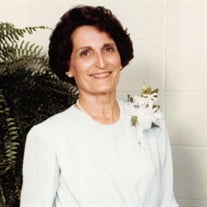 Fann Graddy Bost Amory – Fann Bost, 91, passed away, and met her Savior face to face, on March 23, 2022. She was born a twin, along with her sister Ann, on August 10, 1930, in Ecru, MS to the late Sumner Austin Graddy and Elizabeth Johnson Graddy. Fann grew up in Pontotoc County and from an early age had a natural drive for education. She graduated from Ecru High School, and began school at Mississippi State College for Women and later transferred to Blue Mountain College where she received an Undergraduate degree in Elementary Education. She then furthered her education at the University of Mississippi where she obtained a Masters in Education. Fann worked her career as an Elementary School teacher at Ecru, then at North Pontotoc and lastly as a Guidance Counselor at South Pontotoc. She was a dedicated educator. Marrying her high school sweetheart, James E. Bost, on August 27, 1950, Fann was blessed with five children and many grandchildren and great-grandchildren. She was an elegant southern lady. A fabulous grandmother, she was affectionately known as Mom Fann. She always attended the grandchildren’s events and was always supportive of their activities. Fann loved God and was a longtime faithful member of First United Methodist Church of Amory. While she was able, she served as a Sunday School teacher as well as a member of the choir. Community minded, she supported her husband who was a Judge for many years, and later her children who became professionals who also gave back to others. She was involved with the Aurora Club, was a Worthy Matron of the Eastern Star, involved with United Methodist Women’s Group, and a faithful active member in the Flower Lovers Garden Club of Amory. She had a true green thumb, could grow the most beautiful flowers, and loved being outside in her flower gardens. Fann touched so many lives through the children she taught in school, the family she raised who in turn gave back, and through the love she gave to others. She will be missed dearly. She is survived by her children, Teresa Henry (David), Amory, James “Jimmy” E. Bost, Jr. (Lisa), Amory, Beverly Hudspeth (Bill), Leesburg, VA, Elizabeth Simpson (Stephen), Gulfport, MS, and Martha Stegall (Scotty), Tupelo; fourteen grandchildren; 8 great-grandchildren; sister, Helen Graddy Thomas, of Kansas; several nieces and nephews. A Celebration of Life Service will be held on Sunday, March 27, 2022, at 2:30 pm at First United Methodist Church in Amory with Rev. Wesley Pepper officiating. Burial will follow in Ecru City Cemetery, Ecru, with Pallbearers being Christopher Hudspeth, James “Ty” E. Bost, III, Wesley Bost, Jordan Stegall, Grayson Stegall, and Evan Stegall. Honorary pallbearers will be Zac Cannon, Stone Tosh, and Rob Beebe. Visitation for family and friends will be on Sunday, March 27, 2022, from 1:00 pm until 2:30 pm at First United Methodist Church in Amory. Memorials, in lieu of flowers, may be made to First United Methodist Church in Amory or to Sanctuary Hospice in Tupelo, MS. and memories with her family at eepicklefuneralhome.com

The family of Fann Graddy Bost created this Life Tributes page to make it easy to share your memories.

Send flowers to the Bost family.