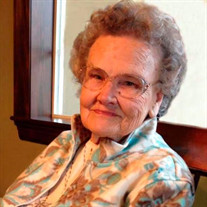 Nacogdoches – Evelyn Wood Randle, 91, passed away on Wednesday, June 26, 2017, at her residence. Born on June 12, 1926, in Amory, MS, she was a daughter of the late Audley Mark and Roxalana McCullough Wood. Evelyn graduated from Amory High School. She married her soul mate, Billy, on June 1, 1946, and together they were blessed with four children. During her career, she worked at the Ammunition Plant in Prairie and the Tubb Printing Co., as well as a garment plant employee and a furniture seamstress. As a charter member of Meadowood Baptist Church, she served as a Sunday school teacher, a Training Union Leader, and WMU director. Later in life, after the loss of her husband, Evelyn moved to Nacogdoches, Texas, where she joined as a member of the Calvary Baptist Church. It was obvious that she loved the Lord and she was very passionate about church missions. Evelyn enjoyed spending time with her family. In her free time, she would go camping and she was a Southern hostess for visiting preachers in her home. She was a Godly woman who strived to show God’s love in her daily life. Evelyn’s closest friends were from her church family at Meadowood Baptist Church. She especially liked the ladies in the “Cemetery Club,” a social group of ladies in Nacogdoches who got together for coffee often. Each lady in the club had her own personal mug, a small detail that Evelyn loved. She enjoyed spending time in her garden and sewing, as well as cooking a delicious meal for her friends. She loved to sit and listen to Gospel music. Evelyn looked to the Lord for guidance in her life. Evelyn was a loving mother and an active church member who always had time for a cup of coffee with friends. She held her family close and left behind a legacy of love and servitude to the Lord. Survivors include daughters, Anita Randle Stevens (Kerry), Brandon, MS, Deborah Randle Wacasey (Gerald), Rockwall, TX, Pamela Randle Keith (Sean), Pineville, LA; son, James Michael Randle (Kristi), Nacogdoches, TX; grandchildren, Kevin Stevens, Brian Stevens, Brett Randle, Dane Randle, Leslie Keith, Mei Mei Keith; great-grandchildren, Morgan Stevens, Kaela Stevens Keefer, Mckaleb Lavalais, Lane Lavalais, Ava Lavalais, Cash Lavalais, Andrew Stevens, Conner Stevens, Sebastian Randle, Brayden Randle, Cade Randle, Olivia Randle, Lola Randle, Chase Soverns, and Damien Carte, Great-Great Grandchildren, Myleigh and Maddox Stevens. In addition to her parents, she is preceded in death by her husband, Billy Franklin Randle; sisters, Mary Jewell Wood Hood, Bonnie Marie Wood Beachum; brothers, Carl, Audley, Donald, Milton, Ralph, Robert, Wallace, and Richard Wood. A memorial service was held at 11:00 AM, Wednesday, June 28, 2017, at Calvary Baptist Church, Nacogdoches, TX. Her Funeral Service in Mississippi will be held at 10 A.M. on Saturday, July 1, 2017, at Meadowood Baptist Church, Amory, with Bro. Danny Burks officiating. Burial will be in Haughton Memorial Park, Amory. Pallbearers will be Fred Wood, Steve Wood, Don Wood, Billy Beachum, Jim Beachum, Bob Beachum, Tom Booth, and Rick Booth. Honorary Pallbearers will be Kevin Stevens, Brian Stevens, Brett Randle, Dane Randle, Van Ritter, and Frank Owens. Visitation will be from 5-8 PM on Friday, June 30 at E.E. Pickle Funeral Home, Amory, and from 9 - 9:45 AM at the church. Memories and condolences may be shared with her family at EEPickleFuneralHome.com.

Nacogdoches &#8211; Evelyn Wood Randle, 91, passed away on Wednesday, June 26, 2017, at her residence. Born on June 12, 1926, in Amory, MS, she was a daughter of the late Audley Mark and Roxalana McCullough Wood. Evelyn graduated from Amory... View Obituary & Service Information

The family of Evelyn Wood Randle created this Life Tributes page to make it easy to share your memories.

Send flowers to the Randle family.