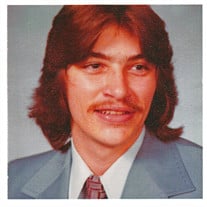 Amory— Esker Lowder, 58, died on Saturday, April 6, 2019, at North Mississippi Medical Center in Tupelo. Born in Itawamba County on March 2, 1961, he was a son of Dallas Wesley and Sarah Roberts Lowder. Esker graduated from Itawamba Agricultural High School. He worked in the furniture industry for most of his life, and he also worked in construction. Esker was a free spirited, wonderful person who enjoyed woodworking and carpentry. He was a talented artist and liked to draw in his free time. Additionally, Esker had quite the green thumb and loved to garden. He had a beloved dog named Rowdy, whom he cherished. Above all, Esker loved his family dearly and enjoyed their company. He will be dearly missed. Esker is survived by his sisters, Blanche Rainwater, Tupelo, Mary Sandlin (Larry), Amory, Linda Jones, KY, Barbara Roberts (Dale), Mantachie, Kathryn Lowder, Tupelo, Ruby Clark (Keith), Blountstown, FL, Brenda Lindley (Bobby), Guntown; a host of nieces and nephews; and special friend, Donna Cagle. In addition to his parents, he was preceded in death by his brother, Dewey Douglas Lowder, and sister, Gladys Rainwater. A funeral service will be held at 2PM Tuesday, April 9, 2019 at E.E. Pickle Funeral Home in Amory, with Bro. Wayne Cox officiating. Burial will be in New Chapel Cemetery in Itawamba County. Pallbearers will include Randy West, Pat West, Mike Bell, Robert Ellis, Brad McCormick, and his nephews, Michael Roberts and AJ Walker. Visitation will be Tuesday from 12:30PM until the service hour at the funeral home.

The family of Esker D. Lowder created this Life Tributes page to make it easy to share your memories.

Send flowers to the Lowder family.