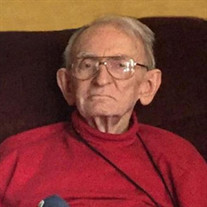 Ernest Carlisle (Sonny) Cadden, Jr., 85, died on October 3, 2020, at his home in Amory. Born on October 21, 1934 in Amory to the late Ernest and Sue Smith Cadden, Sonny graduated from Amory High School in 1952. He received both his Bachelor of Arts in Music (1956) and his Master of Music Education (1964) from the University of Mississippi. As an undergraduate student at Ole Miss, he was the solo clarinetist with both the University Symphonic Band and the University Symphony Orchestra. In 1956, his first teaching position was as Band and Choral Director at Leland High School, a position he held until 1970. During the 14 years in Leland, his bands were consistently rated "superior" in all categories of competition at the State Band Festival. In 1970, he returned to Amory where he served as Band Director for the next seven years, during which time the Amory Band won many honors. At the 1973 Tri-State Band Festival in Enid, Oklahoma, the band was selected the "Most Outstanding in Class" in concert, marching and parade and in concert and parade in 1977. He was conductor of the Greenville Symphony Orchestra in Greenville, Mississippi, from 1966-1969 and was the Concert Director with the Mississippi Lions' All-State Band in 1962, 1966, 1969 and 1974. In 1976, he received the coveted "Mac" award, named in memory of A.H. McAllister, eminent American bandmaster and leader in the field of music education in America. This award recognizes the "Outstanding Band Director" in each of the 50 states. He served as President of the MMEA, Band Division in 1969 and 1973, Treasurer of the MMEA, its parent organization, in 1971 and 1972. He is also Past-President of Phi Beta Mu, Delta Chapter and was State ASBDA Chairman for four years. He also is a member of the Northeast Mississippi Band Directors Hall of Fame and the Mississippi Bandmasters Hall of Fame. He accepted a position with Henco, Inc., in Selmer, Tennessee, in 1977 and continued there for 12 years. In 1989, he was named McNairy County (Tennessee), "Citizen of the Year" and was a Past President of the Selmer Rotary Club. He is survived by his wife of 63 years, Margaret and sons Lee (Amory), Carl (Amory) and daughter Dollie (Navarre, Florida) and grandchildren Blake (Caitlin) of Nashville, Tennessee and Kelsey (Amory). He is also survived by his brother Johnny (Nell) of Amory and his sister Nancy (Florida). He was preceded in death by his parents and his daughter-in-law Kathy. A funeral service will be held on Wednesday, October 7, 2020, at 2:00 in the Chapel at Pickle Funeral Home in Amory with Joe Brennan officiating. Burial will follow in Masonic Cemetery. Pallbearers will be Roger Cadden, Tommy Cadden, Sam Nerren, David Millender, Steve Stockton, Eddie Moak, Russell Hughes and Rusty McMullan. Visitation for friends and family will be held prior to the service on Wednesday from 11:00-1:50 at Pickle Funeral Home. Memorials may be made to the Ernest Cadden Scholarship, c/o Create Foundation, Post Office Box 1053, Tupelo, Mississippi 38802. You may share your condolences and memories with his family at eepicklefuneralhome.com

Ernest Carlisle (Sonny) Cadden, Jr., 85, died on October 3, 2020, at his home in Amory. Born on October 21, 1934 in Amory to the late Ernest and Sue Smith Cadden, Sonny graduated from Amory High School in 1952. He received both his Bachelor... View Obituary & Service Information

The family of Ernest "Sonny" Carlisle Cadden, Jr. created this Life Tributes page to make it easy to share your memories.