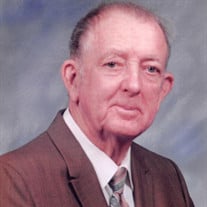 Smithville- Elvis Lavoy Knight, aged 85, passed away peacefully in his home in Smithville, MS, on November 18, 2018. He was born in Bruce, MS, on February 28, 1933, to his father, Elvis Cluster Knight, and his mother, Modess Lancaster Knight. As an only child born during the Great Depression, he had a stoic, no-nonsense demeanor and tended to speak only when something was truly worth saying. But he frequently displayed sarcastic wit as well as a soulful depth most prominently evidenced by the two years worth of letters he sent back and forth halfway around the world to his eventual wife, whom he married on October 31, 1984. He earned a primary school nickname that stuck into adulthood: “Shiny,” as in, a “shining [K]night in armor.” Later on, in high school, he displayed talent for history and mathematics and was also a champion cow judge, an activity that not only led to competitions held at Mississippi State University but also his never-ending support of the institution, both in athletics and academics. He was skilful at all sports, though his lean frame was best suited for basketball and baseball; his affinity for baseball during this time also led him to closely follow the nearby St. Louis Cardinals. During the time of the Korean War, he joined the Air Force and, before his honorable discharge, trained to be an air traffic controller. Later in the 50s and 1960s, he was a prominent and very successful drag racer, widely recognized on streets and tracks throughout North and Central Mississippi; his success in racing continued for several more decades as a car owner. He later studied to become a civil engineer and literally built a great deal of Mississippi infrastructure from the ground up as a project supervisor for 28 years with the United States Department of Agriculture Soil Conservation department. He was a devoted husband and father, and he is survived by his wife, Virginia, his son Vincent, his daughter-in-law, Anna, and a granddaughter due to be born in May 2019. A funeral mass was held at St. Helen Catholic Church, in Amory, MS, on November 20. Memories and condolences may be shared with his family at EEPickleFuneralHome.com.

Smithville- Elvis Lavoy Knight, aged 85, passed away peacefully in his home in Smithville, MS, on November 18, 2018. He was born in Bruce, MS, on February 28, 1933, to his father, Elvis Cluster Knight, and his mother, Modess Lancaster Knight.... View Obituary & Service Information

The family of Elvis Lavoy Knight created this Life Tributes page to make it easy to share your memories.

Send flowers to the Knight family.