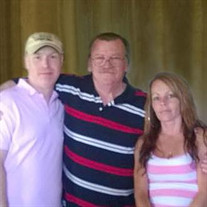 Smithville— Edwon Dale Palmer, 67, passed away on Saturday, February 2, 2019 at NMMC in Tupelo. He was born in Zion, IL on August 28, 1951 to James Ebb and Jessie Mae Pierce Palmer. Dale graduated from Smithville High School with the Class of 1970. During his career, he worked in construction and in oil wells. He worked for Tecumseh FFM, and Elger before leaving work to care for his mother. Dale was a faithful member of Turon Methodist Church and loved God with all of his heart. Edwon was also a member of the Smithville Masonic Lodge. Although he was an independent man, he had a huge heart for other people. His relationships with God and with his family were his top priority. He especially enjoyed spending time with his son, Neil. In his free time, he enjoyed watching TV, Ole Miss Football, and the New Orleans Saints. Edwon was a good Christian man who will be missed dearly by his loved ones. Dale is survived by his daughter, Anna Nicole McKay (Josh), Corbin, KY; son, Stephen Neil Palmer, Aberdeen; grandchildren, Ay McCay, Corbin, KY; sister, Gail Ausborn, Fulton; brother, Billy Palmer (Betty), Smithville; nieces and nephews, Chris Palmer, Heather McFarland, Wendy Sander, Kerri Palmer, and Kelly Palmer; great-niece and nephew, Kymber Palmer, Brantley Palmer; special niece, Teaghan Edmiston; and close friend, Ray Silas. In addition to his parents, he was preceded in death by his brothers, Allen Palmer and Craig Palmer. A funeral service will be held at 2PM on Tuesday, February 5, 2019 at the E.E. Pickle Funeral Home Chapel in Smithville. Bro. Charles Coggins will lead the service. Burial with Masonic Rites will follow at Turon Cemetery, Itawamba County, MS. Visitation will be from 12PM-1:50PM, Tuesday, at the funeral home in Smithville. Donations and Memorials may be made to the Smithville Masonic Lodge – Temperance #438, 119 N Bridge St, Smithville, MS 38870 Memories and condolences may be shared with the family at eepicklefuneralhome.com

Smithville&#8212; Edwon Dale Palmer, 67, passed away on Saturday, February 2, 2019 at NMMC in Tupelo. He was born in Zion, IL on August 28, 1951 to James Ebb and Jessie Mae Pierce Palmer. Dale graduated from Smithville High School with the... View Obituary & Service Information

The family of Edwon Dale Palmer created this Life Tributes page to make it easy to share your memories.

Send flowers to the Palmer family.