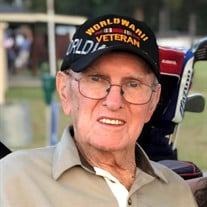 Amory – Edwin Richard Booth, 96, passed away on April 28, 2022, at his residence in Amory, Mississippi. He was born on June 11, 1925, in Perry, Ohio, to the late Russell Booth and Cecelia Czerr Booth. Ed attended Perry, Ohio school until his father passed in 1938 when he was in the 7th grade. After completion of the 7th grade he quit school to help support his mother and 10 siblings working at local farms and nurseries. In 1943, at the age of17 he enlisted in the United States Navy. He served as a Gunner’s Mate Second Class on three ships in the European and Pacific Theaters. Ed received many ribbons, including the WWII Victory Ribbon before leaving the Naval services in1946. A month later, he enlisted in the United States Army where he served as a drill sergeant and shortly after discharged due to dependency for being the primary caregiver for his family. He returned home to work the farm to provide for his family and joined the American Legion where he led drill teams in the local parades and presented the colors at local football games. Later Ed became a butcher and spent years mastering his skill which would come in handy being an avid deer hunter. He then went to work at True Temper in Geneva and later transferred to Amory where he served as the foreman over the tube mill until he retired in 1990. His True Temper family meant a lot to him and he was well respected by his coworkers. He lived every moment to the fullest; he was carefree, joyful, and loved life. He and his soulmate, Joanne Kroflic, were blessed by God with two children, six grandchildren, and six great grandchildren whom he cherished. Ed was a member of the St. Helen Catholic Church and he loved his church family. He loved people, no matter their background. If you knew him, you remember all of his famous quotes including who he was referring to when he said “mommy”. He believed in a solid handshake and was passionate about his country. Ed was a member of the American Legion, Monroe County Bass Masters, Four Lakes, and MS Bass Federation. The outdoors was his happy place where he enjoyed fishing, golfing, hunting, and working in the garden. Besides his love for the outdoors he enjoyed dancing the jitterbug with his lifelong love. He had many fishing buddies, including his longtime partner, Steve Shirley, and they all enabled him to fish until the age of 92 years old. Ed was a proud American who worked hard to support his family through the years and he loved them dearly. They are so grateful for all the great memories made and they know that he is in his heavenly home, with his best friend Joanne and his Savior. He is survived by his daughter, Sandi Stevens (James), Smithville; son, Todd Booth (Kathy), Morrow, OH; grandchildren, Nikki Thompson (Johnathan), Chelsi Stevens (Robby), TR Booth (Samantha), Marney Gratsch (Zach), and Hunter Booth; brother, Bill Booth, Geneva, OH, and Bob Booth (Laurie), Madison, OH; sister-in-laws, Sandy Eisenhart, Francis Booth, and Marney Booth; great grandchildren, Joanna Thompson, Reed Thompson, Calvin Bryant, Ellie Bryant, Landon Booth, and Bailey Gratsch; and a host of nieces and nephews. In addition to his parents, he was preceded in death by the love of his life of 67 years, Joanne Kroflic Booth; sisters, Mary Jane Davis (Jim), Kathrine Birkholtz (Bill); brothers, Gurn Booth, Fred Booth, Harold Booth, Gene Booth (Kathy), Russell Booth, and Chuck Booth; sister-in-law, Judie Booth; nephew, George Eisenhart; grandson, John Douglas Stevens. A Celebration of Life Memorial Service, with Military Honors, will be on Wednesday, May 4, 2022, at 11:00 AM, at E. E. Pickle Funeral Home in Amory with Father Joseph Le officiating. Visitation for family and friends will be held on Wednesday, from 10:00 am until the service hour at the funeral home in Amory. Donations in lieu of flowers may be sent to the St. Helen’s Catholic Church in Amory or to The American Legion.

Amory &#8211; Edwin Richard Booth, 96, passed away on April 28, 2022, at his residence in Amory, Mississippi. He was born on June 11, 1925, in Perry, Ohio, to the late Russell Booth and Cecelia Czerr Booth. Ed attended Perry, Ohio school until... View Obituary & Service Information

The family of Edwin Richard Booth created this Life Tributes page to make it easy to share your memories.

Send flowers to the Booth family.