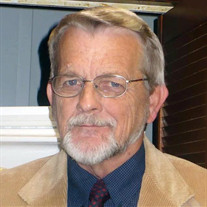 Amory— Robert Edward Sandlin, 68, passed away on Tuesday, February 12, 2019. He was born in Greenwood Springs on August 17, 1950 to the late Hamilton Burley and Elsie Kennedy Sandlin. Robert graduated from Hatley High School and attended Itawamba Junior College. He was a truck driver throughout his life and loved every minute of it. A man of strong faith, Robert was a member of Egypt Baptist Church in Okolona. Although Robert was set in his ways about many things, he deeply cared for his family and was loved dearly. In his free time, he enjoyed fishing, fixing up trucks, and playing around on Facebook. He took very special care of the rose bushes outside of his house. Robert liked watching Westerns and playing guitar. He was talented with any instrument that had strings. He could also be found out in his truck, chatting on his CB radio. A loving, honest man, Robert will be missed by all those who knew and loved him. His family takes comfort in knowing this is not goodbye. Robert was a “truly blessed, undeserving, but forgiven child of God” and his family awaits their reunion in the sky. Robert is survived by his loving fiancé, Linda Chapman West; daughters, Vicki Sandlin (Kevin), Tammy Payne; sons, Bobby Sandlin (Laura), Tracy West (Dena), Jerry West (Melanie); grandchildren, Robert Sandlin Jr., Jordan Sandlin, Jon Logan Little, Reid Little, Lauren Smith, Michael West, Andrew Earnest, Kim Earnest, Kayla Earnest, Rance Goggins, Haydden McGregor, Catelynn West, Rylee West, Clay West; numerous great-grandchildren; brothers, Herschel Sandlin, Roy Lee Sandlin, Larry Sandlin, Junior Sandlin; and a host of nieces and nephews. Mr. Sandlin's funeral service will be held at 3PM Friday, February 15, 2019 at E.E. Pickle Funeral Home with Bro. Tracy West officiating. Burial will follow at Hatley Cemetery. Pallbearers will include Charlie Barksdale, Kevin Woodward, Randy King, Barney Vann, David Armstrong and Brian Shields. Visitation will be from 1PM-2:50PM, Friday, at the funeral home. Memories and condolences may be shared with his family at EEPickleFuneralHome.com

The family of Edward Sandlin created this Life Tributes page to make it easy to share your memories.

Send flowers to the Sandlin family.