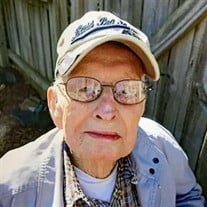 Amory— Mr. Dwight B. Moore, 88, entered his heavenly home on Friday, September 27, 2019. Born in Itawamba County on April 4, 1931, he was a son of the late Claude and Minnie Kennedy Moore. Dwight attended Itawamba County Schools before enlisting in the Army, where he finished his education and served his country faithfully for six years. Four of those years were served in Germany, and the other two in Reserves before an honorable discharge led him back home. In October of 1958, he married the love of his life, Edith Mae Parham. Dwight worked for Hatley Red Kap garment factory for many years. He also sold produce from his “Truck Patch” alongside the roads of Monroe County. Dwight then worked as a school bus driver for Monroe County, specifically Hatley, and those years he genuinely treasured. Dwight was proud of his bus driving career and continued with a servant’s heart to safely deliver children to and from school. Dwight was also a faithful member of Hatley Missionary Baptist Church. Dwight was sweet and honest man that always had a smile on his face. He was known around town for wearing his cowboy hat and for his head-strong attitude. To know Dwight was to love Dwight, as he befriended anyone he met. In his free time, he enjoyed working in his garden and yard, and later he enjoyed playing Rook with his friends at RiverPlace. Most of all, however, his faith in Christ and his love for his family guided his life. He was a proud Veteran of the U.S. Army, a dedicated school bus driver, but first and foremost a family man. He will be dearly missed by his loved ones, but the memories shared will last a lifetime. Dwight is survived by his children, Jerry Moore (Irma), of Germany, Phil Moore (Lisa), Aberdeen, Tammy Moore Whitehead (Gilbert), Smithville, Carolyn Dahlem (Jimmy), Hatley; grandchildren, Erin Moore, LeighAnn Chism (Dwight), Brooke Cockrell (Opie), Meagan McCain (Drew), Mandi Whitehead, Leigh Ann Wright (Ben), Steve Cole; great-grandchildren, Owen, Felix, Drake, Jade, Evie, Marleigh, Emma, Carli; several nieces and nephews; and special friends, Ms. Jo Pearson and Mr. Merle Hipps of RiverPlace, and work buddy Timmy Tartt. In addition to his parents, he was preceded in death by his wife, Edith Mae Parham Moore; sister, Wilma Burks; and brothers, Billy and Earl Moore. A funeral service will be held at E.E. Pickle Funeral Home in Amory at 1PM on Wednesday, October 2, 2019, with Bro. Gary Self officiating. Burial will be in New Hope Cemetery with no formal graveside service. Pallbearers will include Vaughn Outlaw, Tony Dill, Opie Cockrell, Dwight Chism, Drew McCain, Steve Cole, and Jim Parham. Visitation will be Wednesday from 11AM until the service hour. The family would like to extend a sincere thank you to the nursing and CNA staff of RiverPlace Nursing for their exceptional care of Dwight. In lieu of flowers, donations and memorials may be made to Hatley Missionary Baptist Church, 60271 Hatley Rd, Amory, MS 38821 Memories and condolences may be shared with his family at EEPickleFuneralHome.com.

Amory&#8212; Mr. Dwight B. Moore, 88, entered his heavenly home on Friday, September 27, 2019. Born in Itawamba County on April 4, 1931, he was a son of the late Claude and Minnie Kennedy Moore. Dwight attended Itawamba County Schools before... View Obituary & Service Information

The family of Dwight B. Moore created this Life Tributes page to make it easy to share your memories.

Send flowers to the Moore family.