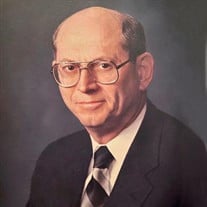 Amory - Dr. Robert J Cole, a faithful servant of Christ as well as a husband, father, friend, and physician, went home to be with the Lord on February 2, 2022 in Amory, MS. He lived his life as a testimony of his love and faith for Christ, which allowed him to love and serve his family and patients. He was born on October 7, 1931, in his family’s home, in Hillsdale, Michigan, and he was the last child of Stacey Albert Cole and Hazel Grace Avery Cole. He grew up in a large family with six other siblings and he attended a one room school house for several years. This little school house was where a desire to serve in the mission field was nurtured. He continued his school years at Hillsdale High School, where his graduating class appeared on the cover of LIFE magazine. Robert then attended Hillsdale College, earning a Bachelor of Arts Degree and then went onto The University of Michigan, earning a Master's Degree in Zoology. His education was provisioned partly by harvesting apples for his uncle at his farm. While waiting for his medical school admission, he attended one year at the Northern Baptist Seminary. He then graduated from the University of Cincinnati College of Medicine obtaining a Medical Doctorate specializing in General Surgery. Dr. Cole later became Board Certified in Surgery in Boston and voluntarily recertified about 10 years later. He completed his residency in New Orleans. He was recruited by Dr. Richard Hollis, to work in Amory in 1963, where he served many faithful years in private practice at Gilmore Memorial Hospital in Amory. He was a long standing member of the Mississippi Medical Association, the American Medical Association, and the American College of Surgeons. By far, he considered his greatest accomplishments to be his marriage to Jane Anne German, in June of 1959, as well the guiding and providing for their children and their education. Spending time with Jane, his children, and grandchildren gave him the most enjoyment in life. Dr. Cole’s other extended family members were the members of First United Methodist Church, where Dr. Cole was an active member for over 50 years. He served as chairman of the mission committee, participated on the Administrative Council, was active in youth programs, and attended medical mission trips in South America with his wife, Jane, and members of the church. He was a wonderful, kind soul, who always put others before himself. Whenever possible, he gave others a hand up and he served selflessly including serving on the Gilmore Foundation. After retirement, he and his wife, Jane, enjoyed travelling and visiting friends and family, especially his numerous grandchildren. Dr. Cole enjoyed sharing his hobbies with his family by "star gazing" at night and giving memorable rides in his Model A that he spent 30 years restoring. He invested so much in his family and they are forever grateful for all the love he gave to them. A very talented man, Dr. Cole was passionate about giving of his time and talents through missions and serving his patients in the Amory community for over 33 years. He touched and helped many people through the years and he always made each person feel special. He will be dearly missed yet his family and friends know that he is now with the ultimate Physician, Christ Jesus. He is survived by his wife, Jane Ann Cole, his three daughters, Carolyn Bouchard (Charles), Karen Jones Dr. Perrin (Jones), and Rebecca Cestaro (Phillip); his son, Robert J Cole, Jr. (Nicola); and his 13 grandchildren, Nathan Cole, Nicholas Cole, Bonnie Cole, Robert J Cole, III, Anna Bouchard, Christa Bouchard, Perrin Jones, Adam Jones, Joshua Jones, Caroline Jones, Anthony Cestaro, Grace Cestaro, and Lucas Cestaro; numerous nieces and nephews. In addition to his parents, he preceded in death by his brothers, Kenneth Cole, Rev. Olland Cole, and Chester Cole; sisters, Lucille Taylor, June Hersha and Betty Weiler. A Celebration of Life Services will be held on Sunday, February 6, 2022, at 3:30 pm, at First United Methodist Church in Amory, Mississippi, with Rev. Wesley Pepper and Rev. Rusty Keen officiating. Burial will follow, with a graveside service, at Amory Historical Society Cemetery, Amory, MS. Pallbearers will be his grandsons and his honorary pallbearers will be the medical staff who served beside him through the years as well as the Gilmore Foundation Board Members. Visitation for family and friends will be held on Sunday, February 6, 2022, from 2:00 pm until the service hour at First United Methodist Church, in Amory. Donations in his honor may be made to First United Methodist Church Missions, 107 3rd Street South, Amory, MS 38821. Memories and condolences may be shared with his family at EEPickleFuneralHome.com

Amory - Dr. Robert J Cole, a faithful servant of Christ as well as a husband, father, friend, and physician, went home to be with the Lord on February 2, 2022 in Amory, MS. He lived his life as a testimony of his love and faith for Christ,... View Obituary & Service Information

The family of Dr. Robert J Cole created this Life Tributes page to make it easy to share your memories.

Send flowers to the Cole family.