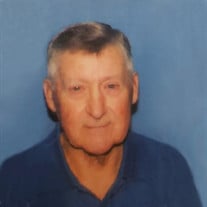 William D. Pierce Smithville - William Dow Pierce, 83, passed away on June 11, 2019, at his home in Smithville, MS. He was born June 12, 1935, in Itawamba County to the late William E. Pierce and Odie Holloway Pierce. Dow was a graduate of the Class of 1953 of Smithville High School. He served our country and was a member of the U.S. National Guard for three years. He was a great provider and a hard worker. He retired from ARCO/Lyondell Basell Chemical Plant in La Porte, Texas in 1995 and he loved being retired. Dow was known as a gentle soul who was observant of the needs of others and always ready with a helping hand. He was well known for his woodworking skills producing clocks, pens, and beautiful bowls. He spent many hours in his shop carving out gifts for others. He was often called, “Mr. Fix-it” because of his ability to fix anything. He was a member of New Bethel United Methodist Church and had a strong faith. Dow was also a former member of the Smithville Masonic Lodge. He enjoyed a good baseball game and was often found rooting for the Houston Astros or Atlanta Braves. His greatest joy was spending time with his family. Other favorite pastimes included playing softball, hunting, and listening to all types of music especially the oldies. This beloved man will be missed by his family as well as the community. Dow is survived by his wife, Cissy; daughters, Kim and Angela Pierce of Houston, Texas; sons, Brent Pierce of Houston, TX and Kent Pierce (Sabrena) of Decatur, AL; sister, Eva Nell Smith of Fulton, MS; brothers, Dudley Pierce (Peggy) of Smithville and Charles Pierce (Mert) of Amory, MS; grandchildren, Ryan Pierce, Meagan Pierce, Kameron Pierce, Jenna Palomarez and Joseph Palomarez; numerous nieces and nephews; special friends, “P-Nut” Jacobs and Ronnie McCain. In addition to his parents, he is preceded in death by sisters, Marcel Bennett, Marlin Phillips, and Jesse Mae Palmer. Funeral services for Dow will be held on Saturday, June 15, 2019, at 11:00 am at the E. E. Pickle Smithville Chapel. Bro. Charles Coggins and Sister Leal Niblick will be officiating. Burial will follow in the Turon Community Cemetery, Itawamba County. Pallbearers will be Barrett Pearce, Ronnie McCain, Micah McCain, Richard Hogan, Dayton Hitt, and Donald Ferguson. Visitation for family and friends will be from 5:00 PM until 8:00 PM, Friday, June 14, 2019 at the Smithville Chapel. Donations may be made to St. Jude Childrens’ Research Hospital, 501 St. Jude Place, Memphis, TN. Please share your memories and condolences with his family at eepicklefuneralhome.com

William D. Pierce Smithville - William Dow Pierce, 83, passed away on June 11, 2019, at his home in Smithville, MS. He was born June 12, 1935, in Itawamba County to the late William E. Pierce and Odie Holloway Pierce. Dow was a graduate of... View Obituary & Service Information

The family of Dow Pierce created this Life Tributes page to make it easy to share your memories.