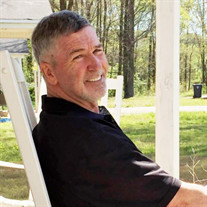 Donny Gene “Donny Mac” McCollum Corinth/Nettleton - Donny “Mac” Gene McCollum, 69, entered into his eternal home on February 19 2021, after a long battle with cancer. Donny was born on October 3, 1951, in Tupelo, MS to Lee Howard and Elizabeth Towery McCollum. He was a 1969 graduate of Nettleton High School where he excelled on the basketball court under the direction of special mentor and friend Coach Delmo Payne. He later joined the Mississippi Army National Guard in 1970 and served until 1976. Donny had a career in the furniture industry working at Action, People Lounger, and for the last 26 years at Corinthian Furniture. Donny always thought of his Corinthian co-workers as his extended family. Donny was an avid outdoorsman, enjoying hunting and fishing and was a fan of all Mississippi State Athletics. Donny also loved the game of softball and is remembered for his athleticism playing short stop on the field. On September 24, 1999, he married the love of his life, Carolyn Sue Clark McCollum. Donny is survived by his wife, Carolyn McCollum, Corinth; sons, Jeremiah Austin McCollum, Corinth, Matthew Mallette (Lindsey), Tupelo, and Joshua Mallette (Samantha), Corinth; grandchildren, Skyler Mallette and Mattie Mallette, Tupelo; his mother, Elizabeth McCollum, Nettleton; brother, Ronald McCollum (Janice), Nettleton; niece, Bethany Canyon (Chris) and their children, Rilee, Taylor, and Addison, Nettleton; special friends, Larry Downs, Vic Etheridge, and Mark Coombs. He was preceded in death by his father, Lee Howard McCollum, and special niece, Emily Grace McCollum. His funeral service will be held on Wednesday, February 24, 2021, at 2:00 pm at E. E. Pickle Funeral Home in Amory with Bro. Billy Burleson officiating. A Eulogy will be performed by Brenda Raper, his sister-in-law. Burial will follow in Liberty Cemetery, Nettleton, MS. Pallbearers will be James Malone, Gerald Pate, Frank Jones, Chris Canyon, Bobby Harper, and Bobby Hendrix. Honorary pallbearers will be Coach Delmo Payne, Vick Etheridge, and Larry Downs. Visitation for family and friends will be held at the funeral home from 1:00 pm until the service hour at the funeral home in Amory. The family would like to extend a special thanks to Magnolia Regional Hospice for their care and compassion provided over the last several weeks. Memories and condolences may be shared with his family at EEPickleFuneralHome.com

The family of Donny "Donny Mac" McCollum created this Life Tributes page to make it easy to share your memories.

Send flowers to the McCollum family.