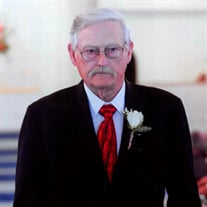 Amory – Donnell Raymond Smith, 84, finished his earthly course and began his new life in Heaven on Friday, December 10, 2021. He was born on March 12, 1937, in Splunge, MS, to the late Clarence L. and Teresa Minga Smith. Donnell grew up in Monroe County, attended school in Splunge and later graduated with the Smithville High School class of 1956. Donnell married the love of his life, Annette Cantrell Smith on November 20, 1955. They were blessed with 66 years of marriage, seven children, many grandchildren, great-grandchildren and one great-great-grandchild. He was a great provider, working at Dalrymple, Walker Manufacturing, Gulf States Manufacturing, and lastly as a Purchasing Agent at ITT. In addition to working and being a father to a large family, he was also a proud patriot, having served this great country in the National Guard for over 12 years. He lived out his faith in God daily, he was humble, kind, and a great guide to help people navigate through different issues in life. Part of his Christian walk included being a Charter Member of St. Andrews United Methodist Church. He was a Mason, dedicated to the lodge and members with whom he made many friends through the years. One of his closest friends was Jackie Palmer. In his free time, he liked to go boating, fishing, hunting, and fixing just about anything. He also listened to radio daily, with 95.7 being his favorite station. There will never be another Donnell, a strong, wise, man who laid a great foundation for his family for many generations. He will be missed dearly yet his family knows that he is healed and at peace. They look forward to the day they are reunited. Left behind to treasure the memories are his wife, Annette Smith, Amory; daughters, Donna Cogsdell, Suzanne Cook (Jimmy), and Laken Bennett (James Allen); sons, Sammy Smith (Sandy), Gary Smith (Sherrie) and Branden York (Katie); grandchildren, Terri Ruth Imel, Emory Causey, Cody Cogsdell, Adam Cogsdell (Tori), Hayley Caughman (Derek), Hannah Kennedy (Jason), Maggie Howell (John Mark Howell), Alec Smith (Kimberly), Patrick Smith, Harley Smith, and Kevin Cook; great-grandchildren, Heather Imel, Jackson Hildreth, Briggs Kennedy, Ollie Jaye Kennedy, Zoey Smith, Addyson French, Caden Cantrell; great-great-grandchild, Aiden Varges. In addition to his parents, he was preceded in death by his son, Michael Todd Smith; brother, Dudley Smith; great-granddaughter and Great-grandson. A Celebration of Life Service will be held on Sunday, December 12, 2021 at 2:00 PM, at E. E. Pickle Funeral Home in Amory with Rev. Brian Gordon and Rev. Jim Mc Clurkan officiating. Burial will follow at Haughton Memorial Park with pallbearers being his grandsons, Cody Cogsdell, Adam Cogsdell, Kevin Cook, Alec Smith, Patrick Smith, and Caden Cantrell. Visitation for family and friends will be held at the Funeral Home, on Saturday, December 11, 2021 from 5:00 pm until 8:00 pm. Donations in lieu of flowers may be made to New Salem Cemetery Fund in care of Jeff Morrow, 60028 McKenzie Road, Smithville, MS, 38870. Memories and condolences may be shared with his family at EEPickleFuneralHome.com

The family of Donnell Raymond Smith created this Life Tributes page to make it easy to share your memories.

Send flowers to the Smith family.