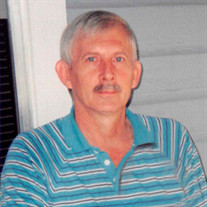 Aberdeen— Donald Joe “Joey” Southard, 65, passed away on Tuesday, July 17, 2018, at West Point Community Living Center. He was born on June 27, 1953, in Amory to Thomas Henry and Lulu Faye Nix Southard. Joey attended Smithville High School. During his career, he worked as a mechanic at FFM Inc. He also worked for Blue Bell Garment Plant as a sewing machine repairman. Joey was a dedicated and hard worker, and an excellent repairman. He was always willing to help anyone in need and could fix just about anything in front of him. Joey was passionate about others and was known for his kindness and great sense of humor. He was of the Baptist faith. During his free time, he enjoyed working around the house, watching TV (particularly, Days of Our Lives), and reading magazines. Joey especially enjoyed spending time with his family. He was a truly wonderful man who will be missed. Joey is survived by his daughter, Jeanie Southard; brother, Thomas Southard, of Amory; nieces, Jessica Stotesman, Melbourne, FL, Kristy Watkins; and nephews, Rick Stoddard, Amory, Kenny Stoddard, Aberdeen, and John Southard, Amory. In addition to his parents, he was preceded in death by his son, Josh Southard; infant daughter, Amanda Southard; and sister, Pat Stoddard. A funeral service will be held at 2 PM Friday, July 20, 2018, at E.E. Pickle Funeral Home in Amory. Bro. Charles Petty will be officiating the service. Burial will follow at Hatley Cemetery. Visitation will be Friday, July 20, from 12 PM to the service hour. Memories and condolences may be shared with his family at EEPickleFuneralHome.com.

The family of Donald "Joey" Southard created this Life Tributes page to make it easy to share your memories.

Send flowers to the Southard family.