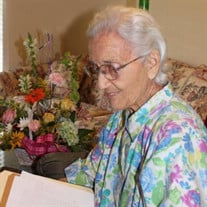 Amory - Dolores Holcomb, 102, passed away on June 30, 2021, at the North Mississippi Medical Center in Amory, MS. On her 100th birthday, she was featured in the Monroe County Journal on November 30, 2018. Here is her story: Dolores Holcomb celebrated her 100th birthday in a way not many centenarians are privileged to do – by still living independently. Her years have been highlighted by living in several different states and operating numerous businesses. “I’ve been blessed with good health. I use very little medicine,” she said. Holcomb was born in Corvallis, Oregon on Nov. 2, 1918, the daughter of a father who was a wagon maker with a moving business in the days when his horsepower was just that – horses. When Holcomb was 4, she lost her mother. Her father then married her late mother’s older sister who raised her. The family worked numerous farms from Oregon to Idaho but lost their crops to spring floods. Her father’s brother lived in Idaho and invited Holcomb’s family to move there. “He didn’t tell us that the property he moved us to was on the side of the river that had no levee,” she said. “He lived behind a levee on the other side.” Holcomb met and married her late husband, Frank, in Spokane, Washington. He was a contract barber for the U.S. Army cutting 40 heads of hair a day at a local base. The day came when the couple had to make a decision regarding the direction of their life together. Frank had to choose among a couple of options – following his client base to another assignment in Alaska or moving to Louisiana, where he had family connections. Dolores advised him to move south since he was starting to deal with bursitis in his shoulders that presented problems with continuing to cut hair. The call of the south prevailed, especially since Frank was a native southerner who was born in Nettleton. The Holcombs had one child, a son who remained in the Pacific Northwest and lives in Washington. The couple moved to central Louisiana to venture into commercial fishing for a while. She said Frank loved to fish. Further business ventures took the Holcombs to the Florida panhandle for 10 years only to lose everything they had in a house fire. They eventually returned to Frank’s native northeast Mississippi in 1986. “Over 46 years of marriage, we had eight different businesses across the southeastern United States,” she said. “All told, I’ve been to every one of the United States but South Dakota and Hawaii. I’ve had driver’s licenses in 12 states and never got a ticket.” After returning to Mississippi, the couple settled eight miles north of Iuka and established a business servicing and storing boats for clients vacationing at Pickwick Lake. She said it was the couple’s best business. The Holcombs tried to retire in Tennessee, but the person who bought their boat business died suddenly before paying it off, so Frank and Delores returned and found a better candidate to carry on for them. After selling the business a second time, they took one last venture and opened a flea market in a vacant store building in Hamilton. Their flea marketing days ran out after a couple of years when Frank lost his eyesight. The Holcombs retired to Fulton, where Frank passed away in 2006. Delores then moved to a rented house Smithville and survived the tornado that lifted the roof off in 2011. “I couldn’t keep that house, so I came to Amory,” she said. “I don’t have any family here, but I have lots of friends.” Holcomb is writing a book of her memoirs. “I only have one more chapter to go. I need to get busy and finish it,” she said.

Amory - Dolores Holcomb, 102, passed away on June 30, 2021, at the North Mississippi Medical Center in Amory, MS. On her 100th birthday, she was featured in the Monroe County Journal on November 30, 2018. Here is her story: Dolores Holcomb... View Obituary & Service Information

The family of Dolores L. Holcomb created this Life Tributes page to make it easy to share your memories.

Send flowers to the Holcomb family.