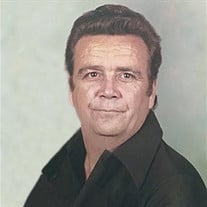 Dewey Dabbs, 79, of Smithville, passed away on Tuesday, April 17, 2018, at River Place Nursing Center, Amory. Born on December 25, 1938,he was a son of the late Dewey E. and Ivonne Staggs Dabbs. Growing up in Tennessee, Dewey graduated from Hohenwald, TN, High School. After school, he honorably served his Country in the United States Air Force. He married the love of his life, Ina Mae Hester Dabbs, and together they were blessed by God with many children. Dewey became a Christian in 1999 and was of the Baptist faith. In Dewey’s early years, he worked in Pest Control Services in Monroe County for many years. He also served the public when he owned and operated Lazy D’s Restaurant in Smithville. His last job was as a truck driver for Amory Garment. In his later years, he enjoyed finding treasures at yard sales and auctions. Dewey also loved to watch Western shows on TV and was a fan of John Wayne. He was an active member of the Blue Blazers Club in Amory. Dewey’s greatest blessings were his children and grandchildren who adored him. Family meant everything to him. With 65 grandchildren and great grandchildren, there is no doubt that he leaves a legacy of memories which will live on forever. Dewey is survived by his daughter, Carol Lancour (Jim), Nekoosa, WI; sons, Johnny Hester, Becker; Jimmy Dabbs (Jill), Smithville; Gary Dabbs, Tremont; Van Dabbs, Smithville; daughter-in-law, Anita Dabbs, Smithville; sister, Doyce Holden, Mt. Pleasant, TN; 21 grandchildren; 44 great-grandchildren; several nieces and nephews. In addition to his parents, he was preceded in death by his wife, Ina Mae Dabbs; daughter, Penny Stanford; son, Coy Dabbs; granddaughter, Robin Dabbs; great-grandchildren, Hollie Chism, Derrick Gold, Tyler Dabbs; brothers, Douglas and Kenneth Dabbs. His graveside funeral service will be at 11 AM, Friday, April 20, 2018, at Young Memorial Gardens, Smithville, with Bro. Jimmy Mc Fatter officiating. Pallbearers will be Nathan Dabbs, Remington Dabbs, Hunter Chism, Kenny Dabbs, Richard McCain, and Ronnie McCain. Honorary pallbearers will be the Staff of River Place Nursing Center. Visitation will be from 5-8 PM, Thursday, at the E. E. Pickle Funeral Home, Amory. We will leave in procession from the funeral home at 10:40 AM. Memories and condolences may be shared with his family at EEPickleFuneralHome.com.

Dewey Dabbs, 79, of Smithville, passed away on Tuesday, April 17, 2018, at River Place Nursing Center, Amory. Born on December 25, 1938,he was a son of the late Dewey E. and Ivonne Staggs Dabbs. Growing up in Tennessee, Dewey graduated from... View Obituary & Service Information

The family of Dewey Dabbs created this Life Tributes page to make it easy to share your memories.

Dewey Dabbs, 79, of Smithville, passed away on Tuesday, April...

Send flowers to the Dabbs family.