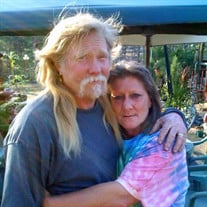 Aberdeen - Dennie Lee Caraway, 66, passed away on Tuesday, December 8, 2020 at North Mississippi Medical Center in Amory. Born on December 20, 1953, he was the son of Iva Caraway Reed and the late Dennie Clayton Caraway. Dennie grew up in Oklahoma and graduated from High School there. A very simple man who was a hard worker, Dennie was a welder and a general laborer for Sanderson Construction. He met the love of his life, Jan Suggs Caraway and they were married on January 24, 1986. Together they were blessed with a son. Dennie was a great provider for his family and he was proud of raising his son. In his free time, he liked to go fishing, especially with his son, Daniel, and he also liked to work on automobiles and trucks. He liked classic rock music and just spending time with his family. After his wife passed away in 2017, Dennie continued to be independent and active. He was a strong independent man who blessed his family with many wonderful years and memories. He will be missed greatly. Left behind to treasure his memories are his son, Daniel Caraway (Shannon), Brandon; grandchildren, James and Scarlett Caraway; his mother, Iva Gardner Reed, Oklahoma; three sisters, Denna Ditto (Mike), Becky Keel (Brent), and Sharon Franks (Steve) all from Oklahoma; half-brothers, Lance Caraway and Jackie Coker, both from Oklahoma. In addition to his father, Dennie Caraway, he was preceded in death by his loving wife, Jan Suggs Caraway. There are no services planned at this time. Memories and condolences may be shared with his family at EEPickleFuneralHome.com.

Aberdeen - Dennie Lee Caraway, 66, passed away on Tuesday, December 8, 2020 at North Mississippi Medical Center in Amory. Born on December 20, 1953, he was the son of Iva Caraway Reed and the late Dennie Clayton Caraway. Dennie grew up in... View Obituary & Service Information

The family of Dennie Caraway created this Life Tributes page to make it easy to share your memories.

Send flowers to the Caraway family.