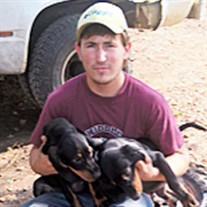 Nettleton— David Eugene “Pooh Bear” Humbers, 18, passed away on August 16, 2018, in Lee County. Born on April 10, 2000, he was the son of Redden “Bubba” and Angela “Angie” Nechol Gosa Humbers. David attended Nettleton Schools and graduated in 2018. He enjoyed school, especially the Vo Tech classes where his talent of working well with his hands was evident. After High School, he started his career working with his hands as a painter with Presley’s Painting. David was a hardworking young man and he enjoyed mechanics work as well. He was always willing to try to fix anything as he was so talented. One who would rather be in the outdoors, David loved to fish for catfish and hunt. He especially liked the challenge of hunting for deer and rabbit. Taking a ride on a 4 wheeler was one of his favorite past times. A sociable man, he especially like hanging out with his best friend Dallas Presley as well as some other good friends, Joey “Dada” Presley, Calvin “D.D.” Merritt, and Jonathan “J.J.” Smith. David listened to all sorts of music, with The Lacs and Upchurch being some of his favorite artists. He was proud of his heritage and he loved to sing. David was as a beautiful and perfect young man who was respectful and polite, and people instantly warmed up to him once they got to know him. His family would tell you that he was an honorable young man with a golden personality. He was a fine young man who loved his family greatly. He was real close to his nieces, Reygan Blackston and Winter Humbers. So many memories he left behind for his loved ones, yet his love and friendship will be remembered and cherished the most. David is survived by his parents, Bubba and Angie Humbers, Nettleton; grandmother, Linda J. Humbers, Sulligent; sisters, Lindalee Nechol Humbers, Nettleton, Alexis S. Kizzire, Alabama; brother, Matthew Blackston, Alabama; aunts, Katrina Blackston, Tracie Blackston, and Kim Presley; uncles, David Gosa and Joey Presley; nieces, Reygan Blackston and Winter Humbers; several cousins; special friends, Dallas Presley, Joey “DaDa” Presley, Dakota Presley, Calvin “D.D.” Merritt, and Jonathan “J.J.” Smith. He was preceded in death by his grandparents, Wanda Lee and Larry Wayne Blackston. His funeral service will be held at 2:00 P.M., Thursday, August 23, 2018 at E. E. Pickle Funeral Home, Amory, with Bro Bobby Alred and Bro. Austin Bowen officiating.Burial will follow in Pleasant Hill Baptist Church, Columbus, MS. Pallbearers will be Calvin “D.D.” Merritt, Jonathan “J.J.” Smith, Matthew Britt, Matthew Blackston, Larry Presley, and Albert Young. Honorary pallbearers will be Denny & Jerald Clayton. Visitation for David will be on Wednesday evening, August 22, 2018 from 5:00 - 8:00 P.M. at the funeral home. Memories and condolences may be shared with his family at EEPickleFuneralHome.com

The family of David Eugene "Pooh Bear" Humbers created this Life Tributes page to make it easy to share your memories.

Send flowers to the Humbers family.