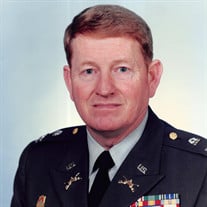 Daniel Elwyn Reeves passed away on July 17, 2017 after a lengthy battle with lung cancer. Born on January 23, 1945, in Amory, MS, Dan was the son of Floyd and Christine Brister Reeves. Dan is likely best remembered by many for his devoted service to and love of the U.S. Army. At age 17, after his junior year in Amory High School and with the permission of his parents, he enlisted in the Army National Guard. After graduation, Dan went to basic training at Ft. Polk, Louisiana, and then to advanced individual training at Ft. Sill, Oklahoma. He served as a combat medic for the next six years, attaining the rank of staff sergeant. In 1968, Dan was selected for Officer Candidate School and after completion he was assigned as battalion medical operations officer for the 1-198th Tank Battalion, 30th Armored Division. While there, he became interested in the armor branch of the Army and requested a branch transfer. After reassignment in 1970, he attended the Armor Office Basic Course at Fort Knox, Kentucky, and subsequently the Armor Officer Advanced Course in 1971. Dan held various assignments in the 1st Battalion, 198th Armor over the next four years and in 1973 was assigned command of the Headquarters and Headquarters Company, holding that position until 1975, during which time he was promoted to Captain. He began full-time work with the Army National Guard and was reassigned to the battalion headquarters as the operations and training officer (S-3 AIR). Dan continued in his position there until being promoted to major. In December, 1982, the 1-198th Armor Battalion was selected to deploy to Germany with the 1st (US) Calvary Division as a part of Exercise Reforger, which was an annual exercise conducted by NATO during the Cold War. Upon conclusion of Reforger in November, Dan was transferred to the 5,000 man 155th Armored Brigade Headquarters based in Tupelo, Mississippi, where he remained for ten years. During his time with the 155th Brigade, Dan held several positions of increasing responsibility, culminating in being assigned as Deputy Commander and a promotion to the grade of colonel. In 1994 and 1995, he attended the Army War College in Carlisle Barracks, Pennsylvania, graduating in 1995. In 1995, Dan was assigned to Camp Shelby, Mississippi, where he commanded the 154th Regiment (Regional Training Institute), and US Training and Doctrine Command Institute for career development. In January, 2000, culminating 39 years of total service and 32 years of commissioned service, Dan retired just after being promoted to the grade of brigadier general. During these years, he made many close and lasting friendships. He was acknowledged for his strong work ethic and his honorable and ethical behavior. He was respected by all with whom he came in contact, and embodied Christ’s example of servant/leader. After leaving the Army, Dan worked for private US contractors providing military operations, staff, and associated training for the armed forces of Croatia, Kuwait, and Albania. He later took a position at Regional Training Manager for KBR in Dubai, UAE, which at the time was providing the civilian logistics support for the US armed forces engaged in Operations Iraqi and Enduring Freedom, with personnel assigned to support Iraq, Afghanistan, Kuwait and Jordan. Dan was responsible for developing the curriculum, programs of instruction, and training support packages for the many disciplines involved in the work. In 2006, Dan transferred to Seoul, South Korea, to manage the office supporting KBR’s bid for the billion-dollar plus US armed forces base relocation project. In 2007, he took a final military support position in Afghanistan in support of the Afghan National Army. When this role was completed, Dan returned home to Amory to stay. Danny was an active member of First Baptist Church in Amory, where he served on several boards and committees. He dedicated his time in service to the Lord and helping those in need. Dan is survived by his son, Daniel Keith Reeves (Carol), Columbus; grandchildren, Jennifer Crippen (Corey), Guntown, Brooke Reeves, Amory, Carrington Reeves, Amory, Matthew Reeves, Columbus; great-grandchildren, Addison and Eli Crippen; siblings, William “Red” Reeves (Sherry), Amory, George “Doc” Reeves (Joyce), Bartahatchie, Clara Donalson, Amory, Cathy Stanley (Oliver), Amory, Ray Reeves (Letitia), Flora; and sister-in-law, Mary Etta Reeves, Amory; several nieces and nephews. In addition to his parents, he was preceded in death by his son, Michael David Reeves; and siblings, Floyd “Sonny” Reeves Jr. and Edwin Reeves. A celebration of life service for Dan will be held on Wednesday, July 19, 2017, at 3:15 P.M., at First Baptist Church, Amory, with Dr. Allen Simpson and Bro. Jimmy McFatter officiating. Pallbearers will be Matthew Reeves, Red Reeves, Doc Reeves, Ray Reeves, Steven Reeves, Oliver Stanley, Bo Stanley, and Todd Stanley. Honorary Pallbearers will be Chuck Burhorn, Lee Miller, Larry Ray, Jimmy Galloway, Danny Sample, Bo Price, Ted Jones, Steve Palmer, Sam Creekmore, David Hill, and Pete Patterson. Burial will be at Masonic Cemetery, Amory. Visitation will be from 1-3 P.M. on Wednesday, July 19, 2017, at First Baptist Church, Amory. Memorials may be given to First Baptist Church, PO Box 540, Amory, or to First Friends, PO Box 117, Amory, MS 38821. Memories and condolences may be shared with his family at EEPickleFuneralHome.com.

Daniel Elwyn Reeves passed away on July 17, 2017 after a lengthy battle with lung cancer. Born on January 23, 1945, in Amory, MS, Dan was the son of Floyd and Christine Brister Reeves. Dan is likely best remembered by many for his devoted service... View Obituary & Service Information

The family of Danny Reeves created this Life Tributes page to make it easy to share your memories.

Send flowers to the Reeves family.