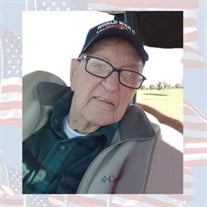 Hatley – Dan Tubb, 95, passed away on Friday, October 2, 2020 at North Mississippi Medical Center – Gilmore, Amory, MS. Born on December 4, 1924, in Amory, MS, he was a son of the late Cullie and Doshie Parish Tubb. Dan Tubb was a lifelong resident of Hatley. He attended Hatley schools and later joined the Army in 1943 where he primarily served in Europe as an infantryman during World War ll. While his company was fighting in Germany, Dan was captured by Nazi troops on December 1, 1944 and designated a Prisoner of War. As a POW, Dan and the other captured troops were forced to engage in what came to be known as the “German Death March” due to the extremely frigid conditions they encountered while marching between different POW camps. Many American soldiers lost their lives during this horrific and inhumane march. After several months as a POW, Dan and other captured troops were released from the POW status and returned to the United States. Upon arriving in the states, Dan was awarded the Purple Heart and Bronze Star. After his military service ended, he returned home to Hatley where he married the love of his life, Clara Cain. With the exception of a couple years in Illinois and Texas, Dan and Clara lived in the Hatley area for the remainder of their lives. They had 4 sons, Ronnie, Danny, Eddy and Kenny. Dan’s vocation was dedicated to the construction business where he was a contractor and ultimately built over 300 houses in the Monroe County area. After retiring he enjoyed traveling with Ms. Clara, family and friends, especially to the Smokey Mountains and the Grand Ole Opry. His vacations also included traveling to the military bases where his sons Danny and Eddy were stationed in the Navy. His hobbies included woodworking and gardening. One of his greatest enjoyments was sharing fresh vegetables from his garden with friends and neighbors. After Ms. Clara passed in 2010, Dan lived with his sons Danny and Eddy as well as being a resident at Oak Tree Manor. A special “thank you” goes out to Theresa and the staff at Oak Tree for keeping Dan comfortable during his final years. Dan is survived by his sons, Ronnie Tubb (Patsy), Fulton, Danny Tubb (Judy), Sabastian, FL, and Eddy Tubb (Martha), Pensacola; grandchildren, Cindy Tubb Whitten, Daniel Tubb, Alysha Laplant, Andrew Tubb, Amelia Allen and Joseph Tubb; seventeen great-grandchildren; sister, Velma Starling, Little Rock, AR; brother, Charles Tubb (Marilyn), Amory; host of nieces and nephews. In addition to his parents, he was preceded in death by his loving wife, Claira Cain Tubb and a son, Kenny Tubb. A Celebration of Life Service will be held at 1:30 pm, on Sunday, October 18, 2020, at E. E. Pickle Funeral Home in Amory, MS with Mr. Tim Cunningham. Burial will follow with military honors at Hatley Cemetery, Hatley, MS. Pallbearers will be Daniel Tubb, David Parker, Andrew Tubb, Drew Tubb, Parker Tubb, James “Bubba” Hodges, Lee Miller and James Earl Waddle. Honorary pallbearers will be Joseph Tubb, Gabriel Tubb, Grayson Tubb, and Rod Bonner. Visitation for family and friends will be on Sunday from 12:30 pm until 1:25 pm at the funeral home in Amory. Memories and condolences may be shared with his family at EEPickleFuneralHome.com

The family of Daniel Tubb created this Life Tributes page to make it easy to share your memories.

Send flowers to the Tubb family.