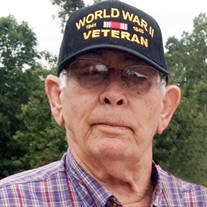 Amory – D.H. Keller, Jr., 95, passed away on Sunday, July 11, 2021, at North MS Medical Center in Tupelo, MS. He was born at Bartons Ferry Community in Clay County, MS on June 21, 1926. He was the son of the late D.H. Keller, Sr. and Mattie Lou Thompson Keller. D.H. attended Barton’s Ferry School, and then at the age of 17, he enlisted in the U.S. Navy, with his mother having to sign for him to enlist. He served as a Petty Officer in the U.S. Navy, in both the Atlantic and Pacific theaters, during World War II. While aboard the USS Alfred A Cunningham, a navel destroyer, he and his shipmates were responsible for rescuing over 800 P.O.W.‘s in Manchuria, and helping to deliver them to a Naval Hospital Ship. After returning back from the War, David was able to graduate from Amory High School. He then served as a Postal Operations Supervisor in the U.S. Postal Service for 35 years. David, was a Godly man, having giving a profession of faith as a member of Hatley Missionary Baptist Church. D.H. was a caring, and loving man who never met a stranger. A family man and avid outdoorsman, he enjoyed fishing, hunting, and gardening. He was also a Master Mason and a member of the Kiwanis Club for many years. David was passionate about giving to St. Jude Children’s Research Hospital and the Palmer Home. David is survived by his son, Mike Keller of Amory; one brother, Gene Keller of Starkville; and numerous grandchildren, great grandchildren, & great- great grandchildren. In addition to his parents, he was preceded in death by his wife, Juanita Chaney Keller, to whom he was married to for close to 70 years; one daughter, Betty Lou Keller; one son, Jimmy Wayne Keller; two sisters, Alice Lusby and Barbara White; and one brother, W.T. Keller. Private graveside services for Mr. Keller have been set for 4:00 PM, Monday, July 12, 2021, at Haughton Memorial Park in Amory with Bro. Mark Thornton officiating. There will be no visitation at the funeral home. Memories and condolences may be shared with his family at eepicklefuneralhome.com.

The family of D.H. Keller Jr. created this Life Tributes page to make it easy to share your memories.

Send flowers to the Keller family.