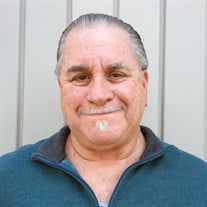 Smithville— Craig Varian, 70, passed away on Tuesday, April 2, 2019 at North Mississippi Medical Center in Tupelo. He was born on October 15, 1948 in Cleveland, Ohio, to the late Wilma Jean and Alfred Varian III. Craig graduated from Nova High School. He enlisted into the U.S. Air Force, where he was a sergeant and served as a jet engine engineer. Throughout his career, he was stationed at Moody Air Force Base in Valdosta, GA, Batch Air in Miami, FL, and with the Columbus Air Force Base in Columbus for 28 years before his retirement. Craig made many lifelong friends during his years with the Columbus AFB. Craig truly had a zest for life. He married Dee on March 5, 1977, and they were blessed with many years of cherished memories. The two were faithful members of Pearce Chapel Free Will Baptist Church in Smithville. He was passionate about guns, motorcycles, and show cars. Craig’s 2012 Genesis Coup won first prize every year it was entered at the annual Amory Railroad Festival Car Show. He was also a member of the NRA, and cultivated friendships with people that shared his same interests. In addition, Craig was an avid fan of college and NFL football, and his favorite team was the Cleveland Browns. Above all, Craig loved his wife, his family, and his friends. He will be dearly missed by those who knew and loved him. Craig is survived by his loving wife, Dee Varian, Smithville; sons, Craig Varian (Lynn), NC, James McClanahan (Randi), AL; Nephew, Trevor Varian (Cherie); grandchildren, Emma Rose Varian, Jaci McClanahan, Tori Tart; brothers, Roger Varian, CA, Mark Varian, OR; brother-in-law, Joe Thompson; mother-in-law, Ethel Wigginton; a host of nieces and nephews; cousin, Susan Gursik (Juan); and many beloved friends. A memorial service will be held at 11:00 AM, Saturday, April 13, 2019, at E.E. Pickle Funeral Home in Smithville, with Bro. John Johnson officiating. In lieu of flowers, donations and memorials may be made to the American Cancer Society, P.O. Box 22478, Oklahoma City, OK 73123; or to the Tupelo Humane Society, P.O. Box 2143, Tupelo, MS 38801 Memories and condolences may be shared with his family at EEPickleFuneralHome.com

Smithville&#8212; Craig Varian, 70, passed away on Tuesday, April 2, 2019 at North Mississippi Medical Center in Tupelo. He was born on October 15, 1948 in Cleveland, Ohio, to the late Wilma Jean and Alfred Varian III. Craig graduated from... View Obituary & Service Information

The family of Craig Varian created this Life Tributes page to make it easy to share your memories.

Send flowers to the Varian family.