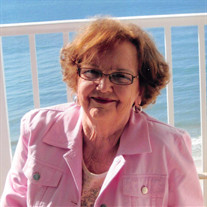 Amory – Connie Jones Wiygul, 83, passed away on Friday, November 24, 2017, at UAB. Born on July 27, 1934, in Prairie, MS, she was the daughter of the late Trible David and Mary Louise Lloyd Jones. Connie went to school in Aberdeen and graduated with the Class of 1952. She married the love of her life, Johnny M. Wiygul, Jr. on February 15, 1956. They were blessed with a daughter and a son. Connie was a member of First Presbyterian Church. She found great enjoyment over her lifetime in her work. That enjoyment was experienced at Jones and Amory Butane, Tubb Printing Co., the Amory City Clerk’s office under City Clerk Bobby Lantrip, and the Mississippian Railway. Many a picture hangs on the walls of Amory homes from Connie’s Frame Shop. She retired from Jim Walter Homes as a Sales Manager in 2003. She loved her family deeply and especially enjoyed her grandchildren. Connie could often be found bragging on her family as she took pride in their characters and accomplishments in life. She was very independent, strong willed and loved to tell you how it was. She enjoyed traveling the roads listening to country music, a sale was always calling her name and a roll of nickels was ready for a spin at the wheel. Memories of her will be cherished forever by her family and friends. Connie is survived by her daughter, Lisa Gray (Keith), Homewood, AL; son, Trip Wiygul (Tammy), Germantown, TN; grandchildren, Kady and Johnna Leigh Gray; Connor and Evan Wiygul; special friends, Barbara Sizemore, Debbie Smith, and Mary Virginia Hawkins. Along with her parents, she was preceded in death by her husband, Johnny M. Wiygul, Jr. Visitation will be on Tuesday, November 28, 2017, from 10 AM until 12PM, at the funeral home with a graveside service at 12:15 P.M. at Masonic Cemetery, Amory. Dr. Tom Cheatham will officiate. Pallbearers will be Glen Bingham, Buddy Carlisle, Keith Parham, Dr. Edward L. Jones, Randy Nicholson and Al Wiygul. Honorary pallbearers will be Leon Carter and C. W. Smith. Memories and condolences can be shared with her family at EEPickleFuneralHome.com. “Lord, open the gates…I have lost my keys again.”

The family of Connie Jones Wiygul created this Life Tributes page to make it easy to share your memories.

Send flowers to the Wiygul family.