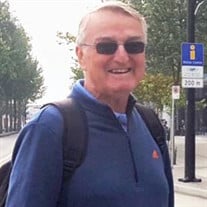 Sunset Beach - Colonel Robert Woodside Campbell, Jr., 73, passed away on June 15, 2019, at his current residence in Amory, MS. He was born in Pittsburg PA, on October 25, 1945, to the late Robert Woodside Campbell, Sr. and Grace Louella Neubert Campbell. "Bob" graduated from Oakmont High school in Pennsylvania. He then attended Robert Morris Junior College and before finishing was drafted into the Army in 1966. He later obtained his college degree in Omaha, Nebraska and earned his Master’s Degree in Fort Lee, Virginia. Bob proudly served our country for over 28 years in the United States Army retiring as full Colonel in May of 1994. His many years of service and leadership skills influenced soldiers under him. After military retirement, he worked for BAE, and later served as Vice President at Northrup Grumman He finally retired at age 65 in Sunset Beach, NC. He was a devoted husband and a great provider for his wife and family. He met the love of his life in the 3rd grade at the elementary school in Oakmont, Pennsylvania, they went on their first date in 9th grade, and later married on December 11, 1965. They were blessed by God with two daughters. Bob’s job allowed his family to travel to several states and countries all over the world. Passionately Bob loved his wife and girls. Faith was always important to him. He was a Member of Oakmont United Methodist Church in Pennsylvania where he sang in the choir. He served as the Chairman of the Finance Committee at the St. Paul United Methodist Church in New Jersey. At Sunset Beach, North Carolina, he was a member of the Seaside United Methodist Church. Robert was a member of the Men’s Golf Association at the Sea Trail Golf Course in Sunset Beach, and he was passionate about Veterans in all aspects. In his free time, he loved traveling, spending time with his wife, playing cards, working in the yard, walking, fishing, and golfing. He loved his daughters, their husbands, and his grandchildren. Christian music kept his faith strong, and he was a wonderful role model over the years for aspiring military leaders. His family and friends will miss him dearly, yet they are thankful for the immeasurable impact he made on their lives as well as so many others. Their beautiful memories will be cherished forever. Bob, loving father and grandfather, and devoted husband, his legacy lives on through his wife of 53 years, Sandra Campbell, daughters, Michele Coco(Chuck), Lea Turner (Mike); grandchildren, Samuel, Jonah, Douglas, Bethany, Abby, Brandon, Emily, Elijah, and Catie; sister, Barbara Charlton; brother, Bruce Campbell; several nieces and nephews. He is preceded in death by his parents. A graveside service with full military honors will be held on Friday, June 21, 2019, at 2:30 pm at the National Cemetery of the Alleghenies, Bridgeville, PA. A Memorial Service will be held on Monday, June 24, 2019, at 10:00 am, at Seaside United Methodist Church, Sunset Beach, NC. Donations may be made to The National Cancer Society. Please share your memories and condolences with his family at eepicklefuneralhome.com

The family of COL Robert Woodside Campbell, Jr USA.RET created this Life Tributes page to make it easy to share your memories.