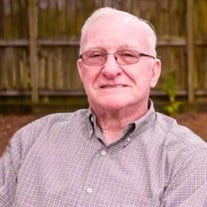 Clinton "Jack" Noe Starkville/Monroe County – Clinton “Jack” Noe, 89, finished his earthly course and began his new life in Heaven on Wednesday, November 17, 2021. Born on September 7, 1932, in Smithville, MS, he was a son to the late John Shaffer Noe and Johnnie Avis Young Noe. Jack grew up in Monroe County Mississippi in a very large family with twelve siblings. He learned early the value of family and hard work. He graduated from Hatley High School in 1949, and furthered his education at East Ms Community College from 1949-1950. A Patriot, Jack then entered into the United States Army and served for two years in the Second Infantry Division, 2nd Medical Battalion, where he served as a Sargent overseas in Korea. Jack left the service and continued his education at IJC for a year and later he obtained his Bachelor’s Degree in Business Administration at Mississippi State. From 1961 until 1997 Jack worked in the furniture manufacturing industry in and around Monroe County and later Starkville. He worked Quality Control for Pullman Couch, Howard Furniture, and retired from FlexSteel Manufacturing. He married his sweetheart Louise Gretter on November 11, 1954, and they shared over 67 years together. They lived in both Amory and Starkville. They were blessed by God with two children and were members of both St. Andrews United Methodist Church and later First United Methodist Church in Starkville. Jack liked to listen to Church music and old hymns. While in Monroe County, he served as the Jaycees President, a Cub Scout Master, a baseball coach, a member of the American Legion and the Church School Superintendent for a couple years. He was a friend to all, was honest and trustworthy, and always had other’s backs in times of need. Jack loved all things outdoors, gardening, especially growing tomatoes, hunting and fishing. A good listener, he was a great Dad as he taught his family how to do things right, the first time. Jack was also an artist, as he would carve some amazing things out of wood. He had an amazing work ethic and his family consider themselves blessed because of all he had done for them through the years. There is no doubt that he will be missed dearly by his family and friends. He leaves behind so many great memories that they will cherish through the years to come. Left behind to treasure the memories are his loving wife, Louise Noe, Starkville; daughter, Bonnie Louise Noe Woodall (Dolph), Madison; son, Jeffrey Maloy Noe (Jane), Houston, TX; grandchildren, Lindsey Noe, Sarah Noe Johnson (Matt), Patrick Wynn Noe, Davis Anderson Woodall (Mary Katherine), and Connor Jones Woodall ; great-grandchildren, Lucy Jane Pesek, Rosemary Elaine Pesek, Maisie Grace Johnson, Griffin James Johnson, and Hattie Louise Johnson; countless nieces and nephews. In addition to his parents, he was preceded in death by all his siblings, Clorine and Sherman Phillips; Inez and Elmo Sullivan; Bernice Bryan; Hurston and Dorothy Noe; Eunice and Grafton Chism; Verdie and Henry Plaxico; Estell and John Vaughan; Beulah Gray and Baxter Neal; Kenneth and Margaret Noe; Shaffer Noe; Eston Noe and Laverne Noe. A Celebration of Life Service will be on Saturday, November 20, 2021, at 1:30 PM, at E. E. Pickle Funeral Home, Amory, Rev. Hugh Griffith officiating. Burial will follow in Tranquil Cemetery, Wren, MS, with pallbearers being his grandsons and family. Visitation for family and friends will be held on Saturday, November 20, 2021 from 12:00 pm until the service hour at 1:30 at E. E. Pickle Funeral Home in Amory, MS. Donations in lieu of flowers may be sent to Wounded Warrior Project, P.O. Box 758517, Topeka, KS 66675 Memories and condolences may be shared with his family at epicklefuneralhome.com.

The family of Clinton "Jack" Noe created this Life Tributes page to make it easy to share your memories.

Send flowers to the Noe family.