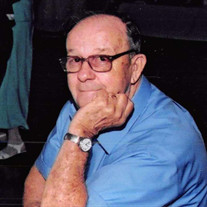 Clarence “Pete” Davis Jr Columbus— Clarence “Pete” Davis Jr., 82, passed away on Sunday, March 11, 2018, at his residence. Born on August 25, 1935, in Aberdeen, he was a son of Mattie Maude Guest Davis and Clarence Davis Sr. Clarence attended Aberdeen Schools. During his career, he worked at a truck driver for Scribner. He was a member of Vernon Church of God. Clarence loved driving trucks and spending time with his family, especially his children, grandkids, great-grands, and great-great grands. Along with Juicy Fruit chewing gum and black coffee, Clarence’s favorite thing was joking and picking with people. He really appreciated his family and loved his Popeye’s fried chicken. He also adored his dog, Apple. Clarence will be dearly missed, but his family takes comfort that they will see him again one day. He has left many memories to bring smiles to their faces for the years to come. Clarence is survived by his daughters, Joyce Flowers (Bruce), Columbus, Barbara Annette Snider, Vernon, AL, Delores Price (Jim), Gautier; sons, David Earl Davis (Sandy), Sidney Earl Davis (Lisa), both of Vernon; sister, Thelma Williams, Birmingham; brother, Charles Davis (Ruth), Aberdeen; 16 grandchildren; 35 great-grandchildren; 9 great-great grandchildren; and a host of nieces and nephews. Along with his parents, Clarence was preceded in death by his wife, Willa Dean Davis; second wife, Marie Davis; daughter, Julie Ann Davis; and brothers, Cecil Wayne and Sidney Terrell Davis. A funeral service will be held for Clarence at 1PM Thursday, March 15, 2018, at E.E. Pickle Funeral Home with Bro. Armon McDill officiating. Burial will follow at Haughton Memorial Park. Pallbearers will include Michael Williams, Danny Davis, Kendall Davis, Daniel Sorrells, Gerald Lovvorn, and Robert Pelphrey. Honorary pallbearer will be Ben Houser. Visitation will be from 11AM-12:50PM prior to the service on Thursday. Memorials may be made to Le Bonheur Children’s Hospital, 848 Adams Ave, Memphis, TN 38130. The family would like to thank Kindred Hospice in Starkville and Kindred Home Health for their love and compassion in taking care of our loved one. Memories and condolences may be shared with the family at eepicklefuneralhome.com

The family of Clarence "Pete" Davis, Jr. created this Life Tributes page to make it easy to share your memories.