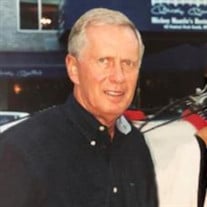 Clarence M. Brasfield Woodstock, GA – Clarence M. Brasfield, 84, started his new life in Heaven on Thursday, November 12, 2020. Born on July 12, 1936, in Smithville, MS, he was a son of the late Clarence Ray and Ivy Dial Williams Brasfield. Clarence grew up in Monroe County MS and at age 9 he was saved at a Revival at Pearce Chapel Baptist Church. He graduated from Smithville High School and furthered his education by obtaining a Bachelor’s Degree from Mississippi State. Later Clarence obtained a Master’s Degree in Accounting from Sanford University in Birmingham. Clarence worked for Southern Bell from 1959-1969, South Central Bell from 1969-1971 and AT&T/Bell South from 1971-1992. He married the love of his life, Doris Henson Brasfield in December of 1958 and they were blessed with a son. In addition to being a great provider for his family, he was a fine example of a Christian man as he loved God through his words and actions. He enjoyed Gospel music and he taught his son the importance of giving to the less fortunate. He was passionate about spreading the gospel to those who did not know Jesus and he gave to many ministries in foreign countries so they could learn about Jesus. He never brought any attention to himself and when he found out about someone in need, he was always the first to give. In 1975, Clarence started running and eventually became an avid runner. Through conditioning and dedication he was able to complete 71 marathons during his lifetime. Other things he did during his free time was to water ski with his friends Doug Hawks, Guy Rutland and Dan Kusick. Clarence kept a meticulous house and yard and he liked to do woodwork in his garage. He liked to capture moments and memories through photography. A loving husband, great father and grandfather, Clarence will be missed by many. The memories made with him will be cherished forever. Above all, his testimony will be his greatest gift to his family and friends. Left behind to treasure his memories are his son, Neal David Brasfield (Holly), Canton, GA; grandchildren, Aubrey Fenton and Ashley Brasfield; great-grandchildren, Ava and Georgia Fenton. In addition to his parents, he was preceded in death by his loving wife, Doris Henson Brasfield; brothers, David Ray and Norris Brasfield. A Graveside Funeral Service will be held on Saturday, November 21, 2020, at 11:00 AM, at Pearce Chapel Cemetery, Smithville, MS with Bro. John Johnson officiating. Pallbearers will be family and friends of Clarence. A private family visitation will take place prior to the service. It is requested that social distancing is observed during visitation and the service. Memorials in lieu of donations may be made to the International Mission Board for the purchase of water filters for homes in Indonesia. Memories and condolences may be shared with his family at EEPickleFuneralHome.com.

The family of Clarence M. Brasfield created this Life Tributes page to make it easy to share your memories.

Send flowers to the Brasfield family.