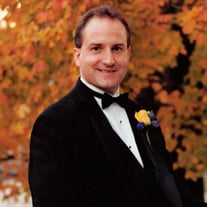 Amory – Christopher “Chris” Richard Smaglick, 57, passed away on Tuesday, October 29, 2019. Born on October 3, 1962, in Milwaukee, WI, he was a son of Gerald and Pat Morrell Smaglick. Chris graduated with the 1980 class of West High School in Wauwatosa, Wisconsin. He continued his education by getting a Bachelor’s Degree from the University of Wisconsin, Milwaukee and then a Master’s Degree in Architecture from Georgia Tech. He was very talented and very detailed orientated. He worked as an Architect with Cad Systems at the Facility Group in Smyrna, GA, and the McCarty Architectural Group in Tupelo, as well as the Ant Brother Farms. He then became self-employed and enjoyed working in both Architecture and Landscape Design. Chris was married to Leslie Smaglick and together they were blessed with four children. He loved his family dearly and was a great provider and hard worker. A caring man, in his free time, he loved reaching lost men through working with the Prison Ministries in West Point. He attended First United Methodist Church and loved the Lord. He loved Psalm 23 and believed whole heartedly that The Lord was his Shepherd. Chris enjoyed watching his children grow up and he was very proud of them as they excelled in everything. He loved to spend some of his down time playing video games with his children and reading good books. He would rather be outdoors at any given time if given the choice. His horticultural skills included growing and caring for Japanese Maple Trees and gardening. A multi-talented man, he was also an artist and painter who loved woodworking, and was a talented cook, which was one of his many talents and passions. Chris’s presence will be deeply missed by his family and friends. He left a legacy of wonderful memories for them to cherish forever. Chris will live on in their hearts. He is survived by his wife, Leslie Smaglick; daughter, Katelyn Smaglick, Yakoma, WA; sons, Max Smaglick, Amory, Sam Smaglick, Amory and Tyler Smaglick, Amory; sisters, Shannon Smaglick, Wisconsin, Maria Smith, South Carolina; brothers, Jim Smaglick, Wisconsin, Mike Smaglick, Wisconsin; several nieces and nephews; special friends, Benny Hutto and John Lopez. He was preceded in death by his parents and a young brother, Patrick Smaglick. His Funeral Service will be held on Monday, November 4, 2019, at 7:30 PM at E. E. Pickle Funeral Home, Amory, with Rev. Bud Gordon, Rev. Brian Gordon and Rev. Wesley Pepper officiating. Honorary Pallbearers will be the ICC Band, Amory Football Coaches and Players, Adrian Sligh, and John Lopez. Memories and condolences may be shared with his family at EEPickleFuneralHome.com.

The family of Christopher Richard Smaglick created this Life Tributes page to make it easy to share your memories.

Send flowers to the Smaglick family.