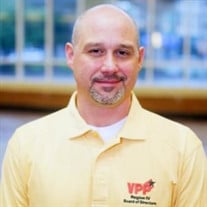 Saltillo—Christopher Jason Colburn, 46, left his earthly course on Thursday, June 18, 2020 in Flowood, Mississippi. Born in Amory on June 17, 1974, he was a son of the late Douglas Wayne and Linda Sue Cantrell Colburn. Chris was a hardworking, determined man. He attended Trinidad State Junior College before transferring to Andersonville Baptist Seminary. He also attended the University of Finlay and the University of Alabama in Birmingham. He obtained his Master’s degree in Engineering and worked for several years as a professor at UAB’s school of engineering. Chris served as Vice President of the VPP Board and was a certified safety professional and certified hazardous materials manager. He worked for Hunter Douglas, Norbord, Cooper Tire, and AGCO. Chris was the Director of Environmental Safety for North America AGCO. He was formerly a southern Baptist preacher at Bethel Baptist Church in Aberdeen. Chris enjoyed playing golf with his buddies and traveling to new places. He loved his Mercedes, his Spring Street cigars, and good food and fellowship. He wrote and played his own music but he also enjoyed listening to Rock & Roll and Jazz. More than anything, he loved his daughters and his grandchildren. He was proud of his education and grateful for all of his successes in his life and career. Chris was a devoted father and a wonderful friend. He will be dearly missed by all who knew and loved him. Chris is survived by his daughters, Lindsey Hester (Levi), of Amory, Madison Colburn (John Morgan Gilland), Nettleton; grandchildren, Camden Michael-Paul Hester, Kynlee Grace Gilland; brother, Darrell Colburn (Tracy), Aberdeen; and niece and nephew, Brittany Canyon and Justin Colburn. In addition to his parents, he was preceded in death by his grandparents, Lois and Luther Dean Colburn and Allene and Theldon Cantrell. A celebration of life service will be held at E.E. Pickle Funeral Home at 1PM on Tuesday, June 23, 2020 with Bro. David Jay as the officiant. Burial will follow at Masonic Cemetery in Amory. Pallbearers will include John Morgan Gilland, Levi Hester, Dennis Branch, Steve Malone, Tom Nutting, and Scotty Harris. Honorary pallbearers are Phil Walsh, Robert Gray, Ricky Harlow, Kevin Kimbrough, and Steve Kane. Visitation for Chris will be on Monday night from 5-8PM at the funeral home. Memorials and donations in lieu of flowers may be made in his memory to the University of Alabama-Birmingham School of Engineering, 1075 13th Street South, Birmingham, Alabama 35205 Memories and condolences may be shared with the family at eepicklefuneralhome.com

Saltillo&#8212;Christopher Jason Colburn, 46, left his earthly course on Thursday, June 18, 2020 in Flowood, Mississippi. Born in Amory on June 17, 1974, he was a son of the late Douglas Wayne and Linda Sue Cantrell Colburn. Chris was a hardworking,... View Obituary & Service Information

The family of Christopher Jason Colburn created this Life Tributes page to make it easy to share your memories.

Send flowers to the Colburn family.