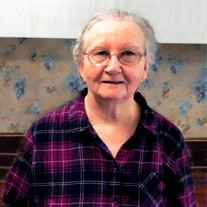 Christine L. Sutton Hamilton – Christine Louise Gosa, 81, met her Savior face to face on January 5, 2021. Born on October 18, 1939, in Hamilton, MS, she was a daughter to the late Thomas Monroe and Velma Lou Garrett Gosa. Christine grew up in Hamilton, MS and graduated with the Hamilton High School class of 1958. She married the love of her life, Charles Sutton on May 30, 1958. The next year, March of 1959, she moved with her husband to Chicago where she worked briefly at a toy factory. Missing the south, they moved back to Hamilton and began to raise a family. She was blessed by God with a loving husband and two sons. Christine was a member of Center Hill Baptist Church in Hamilton. In addition to being a great mother, she had a great work ethic outside of the home. Christine worked at South Monroe Sportswear in Hamilton where she worked until the factory closed down. She operated a Belt Loops machine for many years. Later in life, she also worked as a pizza maker at the Cross Road Shell. Determined, Christine saved her hard earned money for many years so that she could pay cash and purchase a brand new 2000 Chevy Truck. She was an easy going, laid back country girl who loved to garden and cook, especially turnips greens and peas. Her family was blessed because of her servant heart. Christine was also a neat freak and kept a clean home for her family. She liked to listen to Country music as well as Elvis Presley. In her free time, she liked to spend precious time with her husband, children, and grandchildren. She always kept her yard mowed and she enjoyed watching her red roses grow. Many wonderful memories have been through the years with Christine. Her family and friends will miss her dearly yet they know that she is with her Lord and Savior. She is survived by her husband, Charles E. Sutton, Hamilton; son, Charles A. Sutton (Beverly), Hamilton; grandchildren, Eric Sutton, Nathan Sutton; great-grandchildren, Joshua Sutton, Stephen Sutton, Jacob Rogers, Jordan Rogers, Will Helms, and Kristen Hood; brother, Wayne Gosa (Sandra); numerous nieces and nephews. In addition to her parents, she was preceded in death by her son, Richard Wayne Sutton; grandson, Gary D. Sutton; brother, Kenneth Gosa; and sister, Jewel Gosa West. A Celebration of Life funeral service will be held on Friday, January 8, 2021, at E. E. Pickle Funeral Home with Bro. Tony Lindley officiating. Pallbearers will be Michael Smith, Joey Criddle, Ray Winders, Billy Yarbrough, Demarcus Hampton, and Kendall Gosa. Honorary pallbearers will be Billie James Jones, Jr. A private family burial will take place at Center Hill Cemetery, Hamilton, MS. Memories and condolences may be shared with her family at EEPickleFuneralHome.com

The family of Christine Louise Sutton created this Life Tributes page to make it easy to share your memories.

Send flowers to the Sutton family.