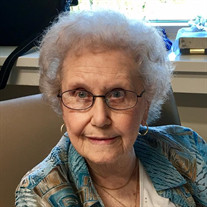 Cordova, TN – Christine Harmon Candle, 89, formerly of Amory, MS, passed away on Thursday, October 19, 2017. Born on September 26, 1928, in Sulligent, she was a daughter of the late Verdo and Jetta Mae Harmon. Christine graduated from Amory High School in 1947. She married Robert Earl Candle on August 17, 1947. Together they were blessed with two children and they were married for 67 years until his death on September 1, 2014. Christine worked as a teller for Security Bank of Amory for 20 years, retiring in 1988. She was a member of First Baptist Church in Amory. Prior to retirement, she loved playing bridge and attending her monthly bridge club. She was a devoted wife, mother, and very proud grandmother and great-grandmother. Christine will be missed dearly by those who loved and knew her. Christine was survived by two children, Neil Candle (Jessie) of St. Cloud, FL, Christy Salvo (Al) of Cordova, TN; four grandchildren, Carla Stewart (Stan) and Kelly Denzio (Scott) of Winter Park, FL; Chris Chapman (Alex) of Nashville, TN; Allison Henley (Billy) of Memphis, TN; six great-grandchildren, London Denzio; Ketcher and Fallon Stewart; Kencade and Everleigh Chapman; Liam Henley; and her sister, Hilda Minga (Aubrey) of Amory. Her graveside service will be at 12:45 PM, Monday, October 23, 2017 in Masonic Cemetery with Bro. Jimmy McFatter officiating. Visitation will be held from 11 – 12:30 PM at E.E. Pickle Funeral Home. In lieu of flowers, donations may be sent to Methodist Hospice Residence, 6416 Quince Rd., Memphis, TN 38119. Memories and condolences may be shared with her family at EEPickleFuneralHome.com.

Cordova, TN &#8211; Christine Harmon Candle, 89, formerly of Amory, MS, passed away on Thursday, October 19, 2017. Born on September 26, 1928, in Sulligent, she was a daughter of the late Verdo and Jetta Mae Harmon. Christine... View Obituary & Service Information

The family of Christine Harmon Candle created this Life Tributes page to make it easy to share your memories.

Send flowers to the Candle family.