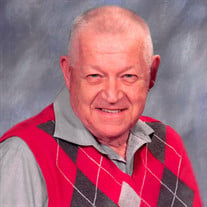 Amory – Charles Matthew Pierce, 81, met his Savior face to face on Monday, April 13, 2020. He was born in Itawamba County, Mississippi on August 19, 1938, to William and Odie Holloway Pierce. Charles attended Smithville High School where he played basketball. Years later, he graduated from the Adult Advanced Machinist Course at Amory High School. His brother Dow introduced him to a beautiful woman and on June 7, 1957, he married her, the love of his life, Myrtie Christian. They were blessed by God with two daughters. He was employed at Walker Manufacturing Company for ten years before moving in 1970 to True Temper Sports, where he would later retire in 2000. After retirement, he transported cars for Sam Stevens and Larry Clark. Charles was a Patriot and loved his country. He served unselfishly for 10 years in the Mississippi National Guard. He was a long standing member of First Baptist Church Amory and a faithful member of Dr. Jim Lewis Sunday School Class. He loved the Lord and was a volunteer at church, where he worked the sound system and ushered during services. A man with a servant heart, after the Tornado hit Smithville in 2011, Charles volunteered for many days helping with disaster recovery. In his free time, he enjoyed playing golf, camping, fishing, hunting, going to the Smokey Mountains, and spending time with his grandkids and great granddaughter. He liked listening to Gospel Music and just being around friends and family. His family came first and he spoiled his grandchildren and great granddaughter. He was a loving husband and great provider for his family. He loved his daughters and the rest of his family so much and they are thankful to God for being blessed by having him in their lives. Charles will be missed dearly by his church family, his friends and his family most of all. All the memories he gave will be cherished forever. His family have peace knowing that he is fully healed, surrounded by love and with his Savior. Charles is survived by his wife, Myrtie Pierce, Amory; daughters, Sharon Hathcock, Amory, Karen McNeese (Dewayne), Amory; grandchildren, Matt McNeese, Amory, Danielle Hathcock, Pontotoc, and Shayla Carter (Brandon), Amory; great grandchild, Lynle Mac Carter, Amory; brother, Dudley Pierce (Peggy), Smithville; sister, Eva Nell Smith, Fulton; sister-in-law, Cissy Pierce, Smithville; several nieces and nephews; close family friends, Brittany Franks and Graham Davis. In addition to his parents, he was preceded in death by his brother, Dow Pierce; sisters, Marcell Benett, Marlin Phillips, and Jessie Mae Palmer. A private family graveside will be held on Wednesday, April 15, 2020, in Haughton Memorial Park in Amory, with Dr. Allen Simpson and Bro. Jimmy Mc Fatter officiating. Honorary pallbearers will include Jim Harlow, Danny Coleman, Dennis Prichard, Steve Turner, Don Baker, Bob Wilson, Don Leech, Jerry Reese, Jimmy Williams, Joe Rieves, Donald Ferguson, Doyle Tubb, Larry Johnson, and Tommy Tapp. No public visitation will be held. Donations may be made to First Baptist Church Amory, General Fund or the Library Fund, PO Box 540, Amory, MS 38821. Memories and condolences may be shared with the family at eepicklefuneralhome.com

The family of Charles Matthew Pierce created this Life Tributes page to make it easy to share your memories.