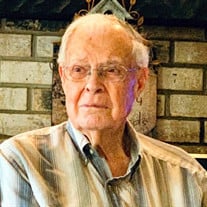 Charles Reed Fears Amory— Charles Reed Fears, 93, entered his heavenly home on Tuesday, May 28, 2019. Born on July 25, 1925, in Amory, MS to James Henry and Orlena Elrod Mundy Fears, he was one of seven siblings. Charles graduated from Amory High School and was one of the oldest living survivors of his high school class. He loved his Lord, his family, and country. He served selflessly in the US Army National Guard. He worked for the Frisco Railroad and eventually became self employed as a land surveyor. A dedicated hardworking man, he worked 70 years as a surveyor and was a skilled perfectionist at his job. He retired in 2016, at the age of 90. He always believed in doing the best job at whatever task was placed before him. He married the love of his life, Angela Darlene Maxwell Fears on January 26, 1973. A great provider and father, Charles was blessed by God, during his lifetime, with five children. His family said he was the most friendly, outgoing man, who was a loving daddy with a huge heart. Above all, he put God first in his life. He, along with other local fellow Christians, met in 1942 and became one of the founding members of the Amory Church of Christ. Charles loved Christ, his church, and he faithfully followed the teachings of the Bible. He was baptized to wash away his sins in Jesus‘s blood. One of his favorite verses was “Work willingly at whatever you do, as though you were working for the Lord rather than for people” Col. 3:23 NLT. His family is forever grateful for the priceless role he played in their Christian walks. Charles was active in many peoples’ lives. He enjoyed spending time with his family and solving all the world’s problems with his McDonald’s coffee club buddies. Some of his closest friends were Arch Justice, Dixon Miller and George Huntington. He was a member of the Sons of the Confederate Veterans where he was one of the oldest living true grandsons of a confederate soldier. A true character, he liked listening to big band music and enjoyed classic artists such as Glenn Miller, Frank Sinatra, and Patsy Cline. In his free time he enjoyed watching shows such as Andy Griffith, Laurel & Hardy, Abbott & Costello, classic silent movies, and Looney Toons with the grands. Although the void is real right now, his family and friends have great comfort in knowing that he is in the presence of his Lord and Savior. He was a blessing to all that knew and loved him. His family looks forward to the day they are reunited, and until then, they will cherish the wonderful memories he gave them. Charles is survived by his wife, Angela Darlene Fears, Amory; daughters, Julie Fears Moore (Slate), Winter Haven, FL, Gail Fears Johnston, St. Louis, MO; sons, Charles Kevin Fears, Valparaiso, FL, Scott Reed Fears (Melissa), Amory; grandchildren, Sean Kaito Fears, Maya Cheyenne Fears, Danika Eve Fears, Sebastian Jett Fears, Micah Scott Fears, Alanah Jordan Fears, Lena Elizabeth Reynolds (Luke), Leisel Elise Moore, Charleston Slate Moore, Shepherd Slate Moore, and Greg Johnston; nieces and nephews, Larry, Ron, Ric, Shane, Shannon and Bobby. In addition to his parents, he was preceded in death by his daughter, Gwenda Lynn Fears; grandchildren, Taiga Kyle Fears and Gabriel Slate Moore; brothers, Norval, Ira and Rubel Fears; sisters Lillian, Virginia, and Glenn; nephew, Bobby; nieces, Iralyn, Patsy; nephews, Elliot and Frank Fears. A Celebration of Life Service will be held at 10:30 AM, Friday, May 31, 2019 at Amory Church of Christ with Mr. Philip Hathcock, Mr. Slate Moore and Mr. Ric Pierce officiating. Burial will follow at Amory Historical Cemetery. Pallbearers will be Kevin Fears, Scott Fears, Micah Fears, Slate Moore, Shepherd Moore, Shane Maxwell, Shannon Maxwell, Luke Reynolds. Honorary pallbearers will be Bobby Maxwell, Kai Fears, Jake Maxwell, Ric Pierce, Ron Pierce, and Larry Fears. Visitation for family and friends will be Thursday night from 5-8 PM at Amory Church of Christ. Memorials and donations in Charles’ honor may be made to: Amory Church of Christ, 1005 Boulevard Drive, Amory, MS 38821 or to the American Cancer Society. Memories and condolences may be shared with the family at eepicklefuneralhome.com

The family of Charles Reed Fears created this Life Tributes page to make it easy to share your memories.

Send flowers to the Fears family.