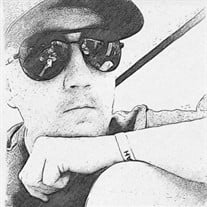 Amory— Chandler Dale Chism, 27, entered into rest on Tuesday, July 2, 2019. Born in Tupelo on December 21, 1991, he was the son of Tim Chism and the late Sandra Bennett. Chandler graduated from Amory High School with the Class of 2010. He then attended Itawamba Community College, where he played in the ICC All-American Band as well as the jazz band. Chandler also attended the University Southern Mississippi as a classical guitar major, and was a member of Hattiesburg Disc Golf Association. Music was Chandler’s life source. He played in many bands and aspired to be a professional musician. Chandler had a special ability with instruments and adapted to many different music styles. While living in Hattiesburg, he taught guitar lessons to underprivileged kids and impacted many lives. Chandler loved his family, music, guitars, disc golf, and Raising Cain’s chicken tenders. He was a drifter and a dreamer, and had the same gentle soul and young heart as when he was fifteen. Chandler was loved by many, and will be dearly missed. Chandler is survived by his parents, Tim and Sandi Chism, Wren; grandfather, Gilbert Powers; brother, P.J. Richardson; uncles, Wayne Holloway (Betty), Ronny Willhite, Ricky Willhite; cousins, Allen Holloway, Lance Willhite, Lacey Willhite, Cassy Holloway, and her children, Destiny, Bailey, and Cooper Holloway. He was preceded in death by his mother, Sandra Bennett; grandmother, Pauline Powers; and brother, Jason Hicks. A funeral service will be held at 2PM at E.E. Pickle Funeral Home on Friday, July 5, 2019, with Bro. Chip Harmon officiating. Burial will be at Tranquil Cemetery in Wren. Pallbearers will be Lance Willhite, Eric Ray, Sean Frank, Tony Phillips, Brad Odem, Patrick Swan, Trent C., and Allen Holloway. Visitation will be on Friday from 12PM until the service hour. Memories and condolences may be shared with the family at eepicklefuneralhome.com

Amory&#8212; Chandler Dale Chism, 27, entered into rest on Tuesday, July 2, 2019. Born in Tupelo on December 21, 1991, he was the son of Tim Chism and the late Sandra Bennett. Chandler graduated from Amory High School with the Class of 2010.... View Obituary & Service Information

The family of Chandler Chism created this Life Tributes page to make it easy to share your memories.

Send flowers to the Chism family.